Louis XIV on The Man In The Iron Mask

On my 10th Character Thursday blog hop, I decided to expand this blog hop for international participants. Therefore, from this post onward, I will post this hop in English. For my Indonesian blogger follower, you are free to post in Bahasa Indonesia, but if you would like to follow my decision, please also feel free to do it. I have provided Google Translation on the sidebar for both Bahasa Indonesia and English for your convenience.

And....here is my Character Thursday of this week:
Louis XIV
The Man In The Iron Mask by Alexandre Dumas 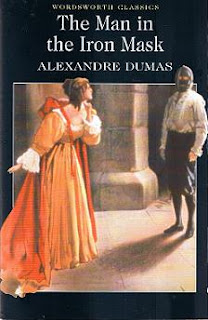 I've always thought that King Louis XIV was the antagonist in The Man in the Iron Mask, considering I've seen the movie many times and Louis was portrayed ruthless, greedy and playboy. Well, here's the difference between book and movie. In the book, we will be able to follow the twists and turns of personality in a character, that it is sometimes difficult to say which one is the protagonist and which one is the antagonist, as each has it own positive and negative aspects, and in fact there is hardly a figure which is always good or always evil.

From the beginning of this story, Louis XIV had had trouble with Monsieur Athos and Foquet. Louis the playboy in this story loves Louise de la Vallière, while the girl was already engaged to Raoul de Bragelonne (son of Athos). Wanting to win Louise, the king sent Raoul to war outside Paris. And so, returning to Paris, Raoul found her fiance has become king’s lover, even though the King has approved the engagement before sending Raoul to war. He was heartbroken. Athos—have pity for her son—faced his King to demand an explanation. In this scene Louis lost his temper.

From his dialogue with Athos, I could imagine Louis's face flushed, with eyes full of hatred, because he knew that he was wrong and he wasn’t able to respond to the respectful but ironic words of Athos. Louis’ words became short and rough, and in his anger, Louis instructed D'Artagnan—his captain of musketeer to capture Athos, though of course D'Artagnan could not do such action which is demeaning the honor of a nobleman and former musketeer like Athos.

In addition to his hot-tempered manner, spoiled (often stomping his feet when angry), and playboy, Louis also mad of respect and worship of power, elegance and majesty, which is natural, given the King is considered a representative of God in the world at that time. So, when the finance minister M. Foquet was holding a party on his palatial mansion, Louis was burning with envy. He felt Foquet has stepped him, which is (supposedly) considered the highest and the wealthiest man in the world. Coupled with the incitement of subordinates Foquet targeting ministerial posts, Louis was jealous as he thought Foquet would like to seize La Vallière from him (without first investigating the truth). The King became angry, and told D'Artagnan to arrest Foquet in his own party while the King was still in his hospitality! Really quite an honorable manner, and D'Artagnan felt it too.

However, when we are nearing the end, things changed... When the king ordered d'Artagnan to catch his friends (Aramis and Porthos as rebels for attempting to swap the king with his twin brother: Phillipe), D'Artagnan met his equal adversary! Because he felt he had managed to 'twist' King’s orders many times before, d'Artagnan immediately made plans for saving Aramis and Porthos without having to violate King’s orders. D'Artagnan was surprised though, when, before he did so, an officer came and said he had a warrant from the King, which forbade d'Artagnan to continue his plan! And it happened not once but three times ... This time Louis XIV defeated d'Artagnan.

And when the angry d'Artagnan confronted and blamed the king for did not believing and embarrassing him in front of his men, this is the answer Louis XIV, with full confidence and authority, has pronounced:

“Captain D’Artagnan, I am master here, and I will have servants who will set no limits to their obedience, though they may perhaps lack your capacity. But one does not require the limbs to be endowed with intelligence. It is for the head to direct, and the limbs to obey; and it is I who am the head. Look around you; you will see that powerful heads had been obliged to bend. You also must humble your pride, or else choose such exile as will suit you best (….) You are a brave man—that I know full well. Why have you judged prematurely? Judge of me from this day forward, d’Artagnan, and with as much severity as you please.”

Gone were the short and rude words. Here is a warning full of grace and dignity, which would certainly make anyone fascinated and 'slapped’. And that was also how d'Artagnan felt at that time, as illustrated by Alexandre Dumas:

“D’Artagnan remained lost in mute bewilderment, and, for the first time in his life, was unable to come to a decision. He had at last found an adversary worthy of his steel. He recognized that this was no longer cunning, but the calculated foresight of a master mind; no longer violence, but strength; in place of petulance and empty boasting, he found determination and method.”

And when a group of M. Foquet’s friends came to ask the King’s help for the poor Madame Foquet, Louis was swept away in sympathy, and finally fulfill their request. For that, d'Artagnan gave Louis XIV a motto: 'Gentle towards the weak, but terrible to the strong'. An attribute that I think should be owned by a leader of a great empire.

In the end (in this story) Louis XIV showed his quality as king of France. Even if he seemed to be ruthless for punishing Aramis and Porthos, I thought it was natural for a king to give lessons to those who intended to rebel (Aramis), and who are too proud of himself regardless the feelings of his King (Foquet). Because if not so, how will a king be honored as the supreme leader?

In this story (again, because I did not read the real history), Louis XIV has transformed to such a character and managed to bring French—step by step—to a better state. I was just thinking, what it would be like if Aramis succeeded in overthrowing Louis from the throne and replacing him secretly with Phillipe? Phillipe might be a more sensible, with higher morality than his brother, but was he ready to become leader of France? Moreover, his brief appearance made me think Phillipe as a melancholy person, who I think is less firm to be the leader of a monarchy.

Inevitably, when I was reading this book, I always imagine Leonardo di Caprio as Louis XIV. I think he is fit to play Louis in the movie version of 1998 : 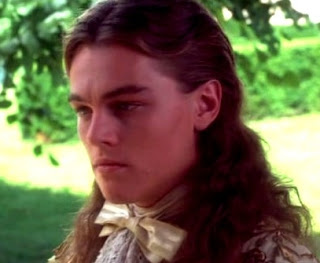 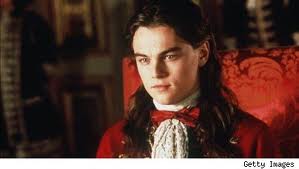 That's my Character Thursday of this week, who's yours?

Posted by Fanda Classiclit at 8:00 AM
Email ThisBlogThis!Share to TwitterShare to FacebookShare to Pinterest
Labels: blog hop, The Man In The Iron Mask