Character Thursday is a weekly meme that requires you to post on every Thursday, your character choice from the book you are reading or you have finished with. It can be the protagonist or the antagonist, characters that you love the most or hate the most. You can pick any book of any genre as you like. Please  feel free to grab the button below and paste it in your post. Last but not least, please add URL of your post in the linky at the bottom of this post. 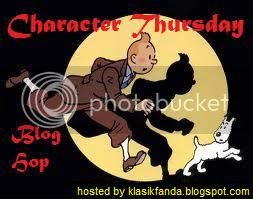 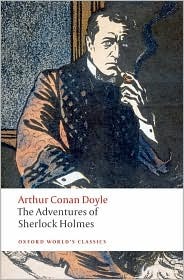 Sherlock Holmes is one of detective figures who became the forerunner of other detective figures in the next era. He is a chemist (besides criminalist) with high analysis and deduction skills which helped him in settling many unsolved cases. Realizing his high expertise, Holmes became a man with high self-esteem and excessively high ego. In one of his records, Watson has written about Holmes:

"I was repelled by the egotism which I had more than once observed to be a strong factor in my friend's singular character."

When examining Watson’s writing about their cases, Holmes criticized Watson for writing a few cases with more emphasis on the sensationality of the case rather than the sharpness of deduction of Holmes himself. It showed very much of his high ego.

Holmes has a very 'Victorian' personage, with a high appreciation on nobility. He preferred to deal with cases of the nobles and respectable people, or dealing with an opponent who has the elegance in their actions. He has a little regret when he was more often dealt with cases of ordinary people.

"The days of the great cases are past. Man, or at least criminal man, has lost all enterprise and originality. As to my own little practice, it seems to be degenerating into an agency for recovering lost lead pencils and giving advice to young ladies from boarding-schools. I think that I have touched bottom at last. "

I think Holmes is someone with more logic than passionate feeling. When he helped a client, it is mostly for the challenge in the case Itself that he did it, rather than for offering a help. When he failed to prevent his client from a murder, Holmes was sad not for failing to save the life of a human being, but for his own failure in the first place.

The only woman Holmes has ever give a certain attention is Irene Adler, the female protagonist who  ever paralleled Holmes. Read what Watson has written about Holmes and his connection to women:

“He was, I take it, the most perfect reasoning and observing machine that the world has seen, but as a lover he would have placed himself in a false position.”

Sherlock Holmes is famous mostly for his intelligence and also his uniqueness in conducting his jobs. Other than that, his unique marks of personality (using magnifying glass, lighting his pipe every time he does his thinking, his skill of undercover), are the aspects that have set his fortune throughout the world. Other than that, I think, he is not such interesting as a person.

So…who is your Character Thursday this week?
Posted by Fanda Classiclit at 7:28 AM

Email ThisBlogThis!Share to TwitterShare to FacebookShare to Pinterest
Labels: blog hop, The Adventures of Sherlock Holmes