My First Impression Of The Color Purple 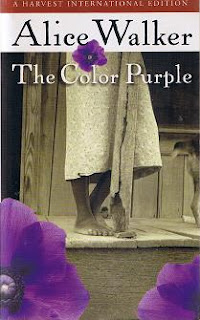 The Color Purple by Alice Walker has been known to be one of the most influencing works of the 20th century. It tells stories of the struggle of African-American women in America. I have put this book in my wishlist in Goodreads as well as in myClassics Club list. However, I still don't have the 'courage' to read it, realizing that reading books about pain and suffer always require my deep passionate and emotional involvement.

So, I was glad when one of the participants of The Classics Club was hosting a readalongof this book. It's encouraging to know that there others who are reading the same book as what you're reading at the same time. I also thank Annisa who lent this book to me. And here I am on page 63 (of 294), but has already been struck by the story...

The story is written as a series of letters addressed to God, by an African-American young woman named Cellie. She was fourteen years old when she was forced to have sex with his father. Becoming a wife didn't make things better either for Cellie. It seemed normal for men at that time to beat their wives just to make them see who the boss of the family is. Some of them just struggled to survive, just as Cellie:

It struck me how men could be so cruel to their wives and children. Men, who were supposed to be family protector, have become the enemy in their own household. However, considering what had happened at the time which this story used as a setting, everything seems reasonable.

1930’s has been noted in history as a hard time for African-American in America, especially in the Southern. Racism was still strong at that time, although some organizations such as Ku Klux Klan had had declined. It’s also hard for African-American women with exceedingly low position in American social culture at that time. Those circumstances are the background of The Color Purple. I think the inferiority of African-American to white people made the situation worsen for African-American women. When the men were intimidated by white people, they found the need to compensate it by intimidating their women (and children) to prove to themselves and to the world that they still have power. The Great Depression also occurred at the same time, which only worsen the situation.

So far, I’m enjoying this book, although I was confused a little bit at first with the language used by African-American, but I got used to it after several pages. Next week I will publish a character analysis from this book in Character Thursday meme, and will post my review at the end of the readalong, on 31 May 2012.

Posted by Fanda Classiclit at 8:19 AM
Email ThisBlogThis!Share to TwitterShare to FacebookShare to Pinterest
Labels: The Color Purple