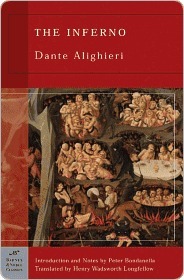 Like Dante, “midway upon the journey of our life/I found myself within a forest dark…”, I too felt like being plunged into darkness when I decided to read a narrative poem of Dante’s The Divine Comedy, end of last month. Being a complete newbie in poems, I just braced myself to read Dante’s Inferno, the first of three parts. At first it seemed like I was going to enjoy the poem, but when I reached the middle, I doubted whether I’d ever finish it. There were many historical persons and events that Italian people in 14th century—or at least whoever studied Italian history—would have been very familiar with, but it was very annoying for us in modern days to follow Dante’s journeys without having to consult wiki or google almost every each circle! Besides that, the poetic lines were also intriguing me along the reading, that at the second half of the poem, I consulted more often a Dante’s translation site I’ve found on the internet; it’s indeed really helpful!

What intrigued me most of Dante’s journey in Hell is the opening stanza, where Dante confessed that he didn’t know how he could have suddenly arrived in Hell.

Midway upon the journey of our life
I found myself within a forest dark,
For the straightforward pathway had been lost.

Dante warns us (who are in the midway upon our journey of life) to reflect where we are ‘standing’ right now. Perhaps we have done so many wrongs and sins in the past, that if God takes our life this very minute, we would go straight to Hell. And yes, how often it is that we find ourselves suddenly far away from the purity that God had granted us when we were born? Suddenly we find ourselves in the dark forest and could no longer see the straightforward pathway to Him. Here and now, it’s time to pause and resume our past journey to be able to rediscover that straightforward pathway to salvation. Reading The Divine Comedy might be the best choice to help us in our own struggles. Dante is very lucky that Beatrice—the woman he loved—took the initiative to send Virgil to guide him in a dangerous and terrifying journey to Inferno (but we are also lucky that Dante ever published this poem!), so that he could warn many people in the world.

Dante portrayed the Hell as a giant funnel built underground that leads to a narrow pit. It was Lucifer, who, when fallen so heavily from heaven, his body (head first) thrust deep down the earth and created the funnel. The narrowest and deepest pit contained of Lucifer’s head, and it held souls with the most severe sin and received the most savage punishment. From the Hell’s gate to the pit there were nine circles with different grades—of course—the deeper the circle, contained the more severe sinners with more severe punishments.

What makes Inferno more interesting—and in a way fit to bear ‘Comedy’ in the title—is how Dante put a lot of historical and mythical characters into each circles. Here you’d find respectable personages like poets, philosophers, and political leaders, historical and mythical figures (Julius Caesar, Brutus and Cassius, Achilles, etc.) were punished in different circles. In a way, it widened your knowledge, because you will be forced to dig about their stories to understand their sins and how Dante punished them so fittingly. It’s quite comforting, for example, to find that Brutus and Cassius were punished far below Julius Caesar; actually you would be surprised to find with whom Dante kept Brutus and Cassius here!

Dante is very detailed in describing each circle’s condition and the severity of the punishments, that it made me often shuddered just to imagine it; for we might read and imagine it in few minutes, but the souls must bear it ceaselessly and endlessly. You will be cringed only by thinking of it! And Dante ‘punished’ the sinners with the same means as the sins they had performed, how interesting it is!

I learned later from Matthew Pearl’s historical fiction: The Dante Club, that Dante has a military background before writing The Divine Comedy, because he fought with the army at a war (I forgot which war). That’s how he learned how some torments would create such tortures to men; something that either a physician or a soldier who survived a war would have known.

In the end, I think I still owed Dante to delve deeper in his poem. I have been more familiar with it now, and in the future I can use the translation (from poetic to prose) to help me exploring the beauty of Dante’s narrative poem. Until then, four stars for Inferno, and I can’t wait to proceed to Purgatorio! 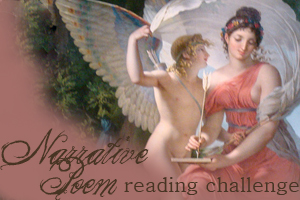