After having breaking down the whole play in several Acts summaries, I am going to post the three stage inquiry required for my WEM Self Project. This is the first one, the grammar stage. The inquiries are slightly different from novels, histories or poems.

The play is opened by the description of peace in England, when the Yorks and Lancasters are having peaceful relationship after war. Only Richard felt unhappy by this situation because of his ambition; he wanted to start another war. So, I guess the initial question is: What would Richard do to fulfill his ambition; can he take over the throne?

This play’s greatest tension is when the Major and citizens came to plead Richard to be their king—and Richard accepted it after declining a few times. I think it shows how Richard has calculated everything; he has got rid of any obstacles to the throne, and he even made the citizens plea to him. It is the sign of his genius, and it answers the initial question. Although unwanted and detested by his adversaries, Richard succeeded because he was clever enough to win citizens’ voices. Richard finally became the King of England!

Although I still don’t get the difference between greatest tension and climax (aren’t they just the same?), I guess the point where the characters change (Richard in this case) is the night before the battle, when the ghost of Richard’s victims visited and cursed for his lost in the battle. Before that Richard was so confident that he would win as: 1). his army is bigger than Richmond’s, and 2). Richmond wasn’t well experienced in battle field. However, after the ghosts’ visits, his conscience began to disturbed him, and the prophecies began to lead his spirit down. I believe this had an influence to his defeat (besides his ex-people’s betrayal).

The last scene after Richard was killed in battle, and the others gave the crown to Richmond. Richmond then brought peace once again into England by putting the Yorks’ and Lancasters’ eternal enmity to an end. 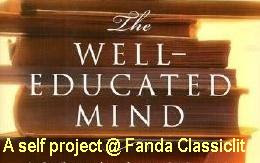 Posted by Fanda Classiclit at 12:28 PM