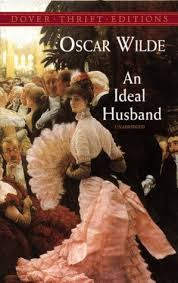 Once again I was amazed by Oscar Wilde—this guy is really cool, isn’t he? After having been impressed by The Picture of Dorian Gray—Wilde’s masterpiece for me—Wilde made me laughing hard at his witty sarcasm in Importance of Being Earnest. After that I was a little worried whether his other plays would be exactly like Importance; very funny but lack of deeper values. I was wrong! This month I picked An Ideal Husband for Let’s Read Plays and, fortunately, The Classics Spin also picked the play from my list by spitting the lucky number 6! So there I was, plunging into the fraudulent scheme, political twist, love story and morality of British society in 19th century. And, although the beginning is rather flat, An Ideal Husband turns out to be one of the most entertaining plays I’ve ever read so far; and more importantly, it’s much deeper than Importance!

Sir Robert Chiltern is an honorable gentleman in society, and respectable politician in the House of Parliament. He was appraised by so many people, but little do they know that Chiltern had done a shameful deceit in his earlier career, from which he has been building his later career and fortune. Lady Chiltern is also a high reputation ‘flawless’ lady in the society. She adores her husband for being pure and noble. In a party one night, a crafty woman named Mrs. Cheveley blackmailed Sir Chiltern to support a fraudulent scheme that he disapproved in the House, or otherwise she would release an old letter that will prove Chiltern’s deceit in public and will ruin his life.

Lord Goring, a young gentleman who leads an easy going, fashionable and enjoyable life style, is a closest friend of Robert and Gertrude Chiltern. Being sarcastic and indifferent outside, Arthur Goring is actually a kind hearted friend inside. When Robert and Gertrude were on the edge of losing each other’s love following the blackmail, Arthur separately tried to help them. Unfortunately, several trivial accidents put Arthur in a complex situation himself; he almost lost his friends’ trust and, most importantly, the young lady he was in love with.

As always, Wilde’s strength in plays is the combination of intertwining plot, complex failures, sarcasm paradoxes to criticize British society at that time, and his clever wittiness. But particularly in this play, Wilde plunged deeper than merely witty banters. My favorite character here is Lord Goring, he’s as easy going as Lord Henry in Dorian Gray or Algernon in Importance, but he also possessed a wise philosophy beneath his indifferent manner, which was always ready to be presented whenever his friends needed it. Far from being shallow, Goring’s advices to Robert and Gertrude were so genuine and useful at the same time. My favorite scene is when Lord Goring gave his speech to Lady Chiltern after the lady restrained her husband from accepting seat in Parliament. Here’s part of it:

“Women are not meant to judge us, but to forgive us when we need forgiveness. Pardon, not punishment, is their mission. […] A woman who can keep a man’s love, and love him in return, has done all the world wants of women, or should want of them.”

In the end, Wilde wants to criticize how British society has been worshiping wealth and status too much that they neglected the genuine values in life: love and honesty. When Robert Chiltern consulted with Arthur Goring after the blackmail, Goring’s first advice is to confide to his wife; that Lady Chiltern loves him and thus will forgive him. On the other hand, Goring also advised Lady Chiltern to forgive his husband, and instead of blaming him, to accept and support him with her love. From the Chilterns’ conflict, I learn that every family, every person must sometimes have crisis in life; but that crisis often get bigger than it should because we are reluctant to be honest. As soon as the Chilterns opened themselves to each other, one by one the complicated problems were eventually unraveled.

Wilde is also emphasizing women’s role in the society. Instead of expecting their husband to be perfect and worshipping them like gods, they should act as a partner by loving and supporting them. It’s really interesting that the philosophy must come from Lord Goring, who was a bachelor. With that quality of perspective, we should envy whichever girl Arthur Goring picks to marry, for he would certainly be an ideal husband!

Four and a half stars for An Ideal Husband, really entertaining!

Posted by Fanda Classiclit at 10:23 AM