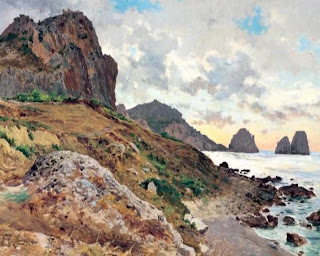 Purgatorio is the second part of Dante’s The Divine Comedy. While Inferno (Hell) is the place to punish sinners, Purgatory is a place where sinners, who repented before their deaths, be purged from their sin, to make them holy before ascending to Heaven. Purgatory is portrayed as a high mountain towards Heaven above. The idea of Purgatory shows how God is merciful, and how He desires the more souls to seek for and come to Him. As with Inferno, in Purgatorio Dante also tells about a lot of topics; historical, spiritual, and even philosophical. That’s why you may find this review much longer than other books, because I intended to take notes of important events and values of the whole poem. I try to break it down to several posts and sub-titles to make this review more comfortable to read. This first post is about Ante-Purgatory, the shores of Purgatory, the lowest level of the mountain.

Ante-Purgatory – The Excommunicate and Late Repentant

Dante still has his journey guided by Virgil. Leaving the darkness of Inferno behind, they approach the land of purging human’s sin before they ascend to Heaven. Purgatory is guarded by Cato, the Roman poet. The atmosphere of this poem is very different with Inferno; while Inferno is choking and hopeless, Purgatory is more hopeful and relieving, even the sceneries are more beautiful.

One of the souls Dante meets here tells how he ends up in Purgatory; it’s because right after he was stabbed, he asks for God’s mercy, and He puts him in Purgatory where he must wait. He says also that prayers from the livings are needed to help the sinners ascend to Heaven sooner. Without those prayers, the sinners—although repent at the end—would have to spend thirty times the duration of their insolent lives on earth (that is freaking!). Dante also contradicts Plato’s philosophy that soul is divided into two; each of them works by itself. Dante believes that soul is united and whole.

Focus and effort are needed in Purgatory

While climbing the steep mountain in Purgatory Dante feels exhausted; Virgil encourages him to keep dragging himself up. It shows how to be purged from sin we must put efforts to climb, while to descend to ‘Hell’ is much easier. Belacqua—Dante’s lazy friend—says that he had postponed his repentant until the last minutes, that he must now wait a lifetime in Purgatory, so he must not he hasten to climb. That must be the wrong attitude when we are sinned, but which most of us often do! Once Dante hears voices that split his attention; Virgil scolds him for this distraction. He tells Dante to avoid too much reflection that disturbs his focus.

The efficacy of prayer and Dante’s speech

A group of shades (Dante calls them ‘shades’ instead of ‘souls’ like in Inferno) say that they have died of violence, but as they had repented while dying, God puts them in Purgatory while filling them with the desire to seek for Him. They are hoping that someone else may pray for them to hasten their ascent to Heaven. At this point Dante criticizes Virgil for writing denial of the efficacy of prayer in Aeneid. Virgil explains that Aeneid was written in the Pagan world, when people were not united with God.

After meeting his fellow poet Sordello, Dante then makes speech about the disastrous Italy; lamenting it as a wretched country, abandoned by German Emperor—Albert, Justinian (Byzantine Emperor) and the clergy. He curses the endless feuds of Montagues and Capulets in Verona, and many other schisms. It is Dante’s expression of his frustration towards his country who has banished him. His ideal form of country is where politics and religion (Church) be separated. He compares the tyrant cities with Marcellus who conspired against Caesar. It is indeed one powerful speech!

Negligent rulers and the Angels

From Sordello Dante learns that there are not fixed places in Purgatory (unlike Hell with the circles); there is a degree of freedom as it is the place of spiritual pilgrimage. Sordello also agrees to be Dante and Virgil’s guide. They reached a beautiful landscape on a hollow valley which is rich in colour and odour; while they hear spirits singing Salve Regina, seems that they are the shades of the negligent Kings and rulers’. A lot of historical European leaders are mentioned here.

In the evening (when regret and hope arise), Dante sees the spirits raise their faces and hands up to God, singing hymn of prayer before the end of the day. Then pair of Angels who guard the gate of Eden descend; they will guard the spirits from the serpent (temptation) who used to come at the end of day. After sunset Dante meets Judge Nino; who is amazed that Dante travels there as a living creature; a sign of God’s graceful. He then asks Dante to tell his daughter to pray for him.

When Dante sets his eyes above to Heaven he sees three flames—which represents Faith, Hope and Charity [source]. Then comes a serpent—which perhaps the one who had seduced Eve to eat the forbidden fruit—twisting its head to its tail forming a circle, just like eternal circle of sin there is in this world. The Angels transforms into falcons, and flying to drive the serpent away.

Overcomes with lack of sleep—Dante has spent three sleepless nights (from the first he arrived at Inferno)—Dante has his first dream. A flying golden eagle has snatched him and together they are burned into fire, just like phoenix. When Dante awakes, Virgil encourages him by telling that when he’s asleep, Lucia came and brought the sleeping Dante upwards, followed by Virgil, to make their journey easier. And so, they reach the gate of Purgatory.

They reach a gate with three steps of various colors, and an Angel sits upon the threshold on the top step. Apparently the gate is a symbolic of Sacrament of Penance; the Angel is the priest, the three steps are three stages in the Sacrament: Repentance, Confession, and Forgiveness [source]. When Dante falls on his knees by the Angel’s feet begging for the gate opening, the Angel inscribes seven P’s on his forehead representing seven capital sins that he need to be purged. The Angel puts two keys—silver and gold—and with that he lets Dante and Virgil enter the gate.

Posted by Fanda Classiclit at 11:17 AM