Following my first post of Purgatorio review posts (Ante-Purgatory), now Dante brings us to the terraces of Purgatory. There are seven of them, and this second post will cover the first two of them. 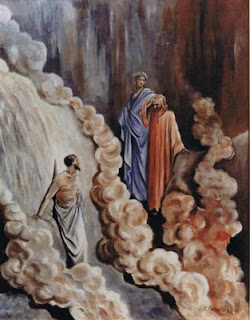 Dante and Virgil enter pass the threshold and they cannot look back. They are first met by wavering rocks which are slackening their pace. There is a high wall where is sculpted the figure of Mary’s Annunciation by Gabriel The Archangel, the example of humility that corrects pride. There is also the sculpture of King David and the Ark of the Covenant, with the scornful Michal, daughter of Saul [from Old Testament: 2 Samuel 6]. Next to it the sculpture of Emperor Trajan shows compassion towards a widow.

Dante explains that Purgatory put burdens to sinner, not punishment; the Proud people must bear burden to force them to humility. Dante reminds us that we are only worms which are going to transform into butterflies; and that’s why we need to be humble. The proud sinners then paraphrase the Lord’s Prayer (which I think is picked from ‘Our Father’), emphasizing the humility. They have prayed for us, and Dante suggests that we reciprocate by praying for the dead.

Dante also points out artistic pride, where poets or painters passionately compete to supersede each other, through a testimony from Oderisi of Gubbio. He also gives an example of humility through the story of Provenzan Salvani who wore beggar’s clothes to procure the ransom of his friends’ imprisonment. For what he’d done, God granted him a place in Purgatory.

Then Dante sees many sinners of Proud, among them are Satan--a nobler creature than others yet had fallen so deeply from Heaven; Saul, Jupiter, Athena, Apollo, etc. At the end of their visit to first terrace, The Angel of Humility welcomes them and promises them a safe journey.

When climbing further stairs, Dante feels himself much lighter than when he's still at the Terrace. Virgil explains that when each of letter P's were erased, Dante would feel his step lighter, and finally takes the journey more as a pleasure than a burden. When Dante feels his face, one letter has indeed erased.

The second terrace is quite plain, with livid color; here Virgil uses sun rays as his guide. They hear voices of, but can't see, spirits in the air. The first one represents Mary's words at the wedding in Cana: "They have no wine." The second one says: "I am Orestes" (about his friendship with Pylades). And the last one: "Love those from whom ye have had evil" (Matthew's Gospel of loving instead of hating). They're all about Love which would scourge the sin of Envious.

Then Dante saw the spirits in coarse cloak who cried their prayers to Mary, St. Peter and Michael the Archangel. They look like blind beggars begging for alms from Churches, as their eyelids are pierced with iron wire as the punishment. A spirit called Sapia Saracini tells her story, how she had rejoiced upon the massacre and defeat of Sienna, and how the prayers of a padre (for she was generous at the end of her life) has reduced her punishment at Purgatory.

At the end of their journey at this terrace, they hear cries of Envies, first from Cain who envied then murdered Abel: “Shall slay me whosoever findeth me!” and next is of Aglaurus who envied her sister: “I am Aglaurus, who become a stone.” Virgil admonishes human kinds for their ignorance towards Heaven’s calls, and let their eyes ‘looking on the ground’ instead.

The sun ray reflects brilliantly into Dante’s eyes that even when he shades his sight, it still blinds him. Virgil tells him that it’s Heavenly light brought by a messenger (Angel of Fraternal Love) who is coming to them, and soon it won’t bring pain anymore but joy. Their climb is now easier; and Dante asks Virgil the meaning of division and partnership. Virgil explains that envy destroys fraternal love, while sharing goodness increases love; and that the more Heavenly love we share, the more we gain, just as the rays reflect from the mirror. Virgil promises Dante that Beatrice would see him to explain more; and with that, one more P’s is erased from Dante’s forehead.

Posted by Fanda Classiclit at 7:24 AM
Email ThisBlogThis!Share to TwitterShare to FacebookShare to Pinterest
Labels: Purgatorio