Following my summarizes of Ante-Purgatory, Terrace 1-2, Terrace 3 – 5, these are the two final terraces of Purgatory where Dante is purged from his sins. It’s not the end of Purgatorio, though, as after this Dante would still go through The Earthly Paradise, the last step towards Paradise! Meanwhile, here are the sixth and seventh terraces… 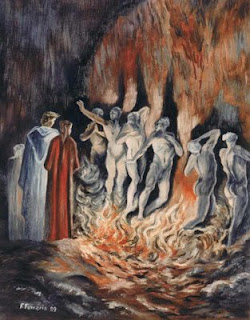 Another letter P has been erased from Dante’s forehead by the Angel of Liberality. Statius tells them that avarice is not his sin; it’s prodigality—his excessive and wasteful spending. Fortunately he read Virgil’s Aeneid which brought him more to Christianity, for his Thebaid has a touch of Paganism.

Now the three poets resume their journey together to sixth terrace. There they find a tree heavy with fruits and fruity fragrance; the smell triggers the desires on food and drink. It tantalizes the spirits who are punished with gluttony sin; while a voice retells about Mary who thought about the host’ honour at the Cana marriage instead of herself, and John the Baptist who merely eats honey and locust in the desert. The spirits purge themselves from gluttony sin by using their mouths for singing and weeping.

Dante then meets his friend Forese Donati, now a skinny man with leprosy, who is purging his sin of gluttony, thanks to his wife who prays for him. He also criticizes the immodesty of Florence women and prophesies something bad would happen to them. Forese also prophesies Dante’s befriending the beautiful Genthucca.

After Forese left them, the three poets reach a second-tree, which is grafted from the Tree of Knowledge of Good and Evil, whose fruit Eve had eaten from. Some spirits plead with it, but the tree abandons them. So the excessive desire of food and drink is now replaced with that of knowledge, and the spirits are punished for that. The Angel of Temperance now appears, showing the next path to Dante before clearing one letter P’s from his forehead.

Meanwhile, Dante still has an unanswered question: how come the spirit they have just left was starving when food wasn’t necessary anymore. In it, he wants to know about the nature of soul after death. Statius provides him the knowledge about human embryology. When the ‘perfect blood’ of man and woman are mixed—the male’s active, the female’s passive—it has power to invigorate life, creates the embryo, and develops organs. The embryo possesses life (as in plants), and sensation and feeling (as in animals). An Arabian physician and commentator on Aristotle, Averroës, shared the same theory; but Dante (through Statius) disagrees with him. He believes that as soon as the brain is complete, God breaths rational spirit into it, which finally becomes one unified soul that exists after death. After death the soul leaves the body, keeping memory, intellect and will with it, unto the after life. It forms a shadow in the air, which we call spirit.

Reaching the seventh terrace, where sinners of Lust are purged. They are welcomed by a narrow path; from one side of it flames hurl from the down cliff, while on the other the danger of falling. From the burning flames, Dante hears the spirits walking through the flames while singing Matin hymn, the opening of a prayer for protection against lustfulness. They also mention the examples of chastity: Mary and Diana.

Couples cannot embrace one another, they merely exchanges friendly kisses. Lustful is one of Dante’s weaknesses when he fell in love with Beatrice. But after Beatrice died, he transformed his courtly love into a more divine and spiritual one; through Beatrice, Dante sees God.

An Angel appears from within the flames and tells Dante not to step further unless he has been bitten by the fire first. Virgil encourages the terrified Dante to have faith and go through the flames that won’t hurt him; only the name of Beatrice that really brings Dante encouragement to get through.

Out of the flames, the three of them reaches an ascending way through a rock. They were soon overcome with sleep; Dante—similizes himself as a goat, while his two teachers are as his shepherds who are guiding him in his reflection of the past. Then Dante has another dream….

A young beautiful lady gathering flowers for a garland appears to be Leah (symbol of actions), while her sister Rachel (symbol of contemplation) appears as a reflection from a mirror. It tells Dante that in trying to reach Heaven, contemplation is much better than action (compare with Mary and Martha in Bible). When he wakes up from his dream, Virgil tells Dante that it’s time for them to separate. Virgil has been safely guiding Dante into the end of his passage through Purgatory, having gained understanding and love, things that Virgil himself, as teacher, failed to reach. Now Dante is purged, and his free-will will guide him directly towards the good.

Posted by Fanda Classiclit at 7:21 AM