Continuing Dante’s Purgatorio, these are my summary for the third, fourth and fifth terraces. Previously I have also posted the Ante-Purgatory and Terrace 1 and 2. 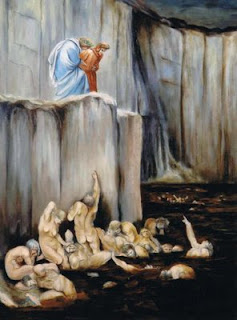 Entering the third terrace, Dante has a vision that he is in a temple among many others, when a lady enters and says: “Son, why in this manner hast thou dealt with us? Lo, sorrowing thy father and myself, were seeking for thee” which was what Mary told Jesus in the temple when he was a boy, a sign of gentleness. Dante also envisions how wrathful people were stoning St. Stephen, but he asked God to forgive them. Virgil again warns Dante to not being lazy; and the night soon falls enveloping them with darkness and smoke.

The smoke here is very thick that Dante could not see, and therefore need to be guided by Virgil. He hears voices praying Agnus Dei which are sung by the spirits to untie their angers. One spirit, Marco Lombard, a Venetian courtier dismisses the idea that Heaven dictates its will to human kind; for we have been granted free-will to accept the good and dismiss the bad. So the sin is actually caused by ourselves. We were born like a pure and innocent child sprung from our Creator, full of goodness, and can stay like that only if we maintain our love pure. That is why we need to have good Law and ruler as curb to guide our soul. Marco laments then the corrupt nation and Church, and it is bad leadership that makes the world sinful. Rome had used to separate nation from religion, but now that the two are linked, it goes wrong. Marco laments the decreasing of Lombardy after Frederick II ruled it. Thus Marco is sinned for being wrathful. After the conversation, the Angel of Meekness appears to guide them.

Dante and Virgil are stuck before entering the fourth terrace. Dante begs Virgil to explain the nature of Purgatory. According to Virgil, there are two kinds of Love: natural love, which is free of error, and rational love, which can err. Sin is the misuse of free-will, the result of the error of love. While in Inferno love is abused, in Purgatory love is re-oriented. Rational love can turn to sin when it is wrongly directed to evil ends: Pride, Envy, Wrath or other wrong ends: Sloth, Avarice, Gluttony, and Lust. As rational love opposes hatred towards Creator and self-hatred, Virgil concludes that the existence of community and relationship are the cause of it.

Dante then asks about earthly love; to which Virgil answers that moral and ethics are the products of our continuous choices in judgment. Dante’s earthly love for Beatrice might be purged here in the Purgatory.

Now Dante sees some spirits hurrying to take up their penance; they are longing to be purged from their sins. The spirits point out two examples of Sloth: the Israeli who delayed their journey after being released from Egypt, and Aeneas' followers who chose to stay behind instead of heading to Italy. Many thoughts come to Dante after that and he is falling into his second dream.

This time Dante sees the Siren--half woman half bird--approaches him and sings her alluring song, just as when she lured Ulysses' sailors to sail off course. The Siren is a symbol of temptation, which leads to avarice, gluttony and lust sins. A saintly lady (symbol of the righteousness) asks Virgil to snatch the Siren from Dante's dream, and with that, Dante wakes. Apparently, lust is one of Dante's weaknesses.

With burden in his thought, Dante resumes his journey with Virgil, while a soft voice of Angel of Zeal shows them the path upwards, and erase another letter P from his forehead. Apparently Dante still cannot release himself from his dream, that Virgil scolds him: 'Remorse is fine but excessive dwelling on evil may be an obstacle.’ [source] With that Dante unleashes himself from his remorse, and climbs to the next terrace.

The first thing Dante sees on Terrace five is people lying on the ground, weeping, face downwards, and repeating verse from Psalm 119. They are the avaricious souls. One of them is Adrian V, the Pope who was bound to his family's greatness before repented after elected as a Pope. And because of his late repentance, he now deserves to be purged there.

Dante then accursed avarice (she-wolf in Inferno), before hearing weeping from a spirit which gives us few examples of poverty that is liberating: to Mary, who was so poor that the inns refused her to stay for laboring the Child; to Saint Nicholas of Bari, who sent gifts for poor girls so that they could pay their dowry and saved their honour. The spirit appears to be Hugh Capet, King of France who descended the Philip’s and the Louis’. Hugh and Dante then discuss examples of avarice sins: Pygmalion—who killed Dido’s husband for gold, Midas, Sapphira and Ananias—for their hypocrisy about their wealth and rebuked by Peter, and Crassus.

Then there’s an earthquake that shook the Mount, which encourages the spirits to sing ‘Gloria in excelsis Deo’. Dante and Virgil stand still, as still as the shepherds when hearing Angels’ voices at Child’s birth. Dante is anxious to know the cause of the earthquake, yet he is afraid of asking, so he just resumes his journey. Meanwhile, Dante’s existing thirst of knowledge can only be quenched by the Heavenly water of truth (just as what Christ said to the Samarian woman); fortunately then, he met Statius, a Roman Poet who can satisfy this, instead of Virgil, whose philosophy is too earthly.

Statius explained that the earthquake happens when a soul feels himself purged, and is ready rise above to Heaven. It causes earthquake because the free-will has gripped the soul and empower it to rise freely. The earthquake is also symbolism of the earthquake that separates Roman Empire before and after Christ. Statius tells then his own history and how Virgil’s Aeneid has been his influence. Dante than introduces Statius to Virgil himself, and both Poets shares humility and love to each other.