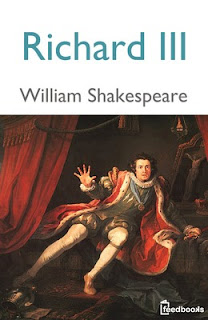 Richard III is the first Shakespeare historical themed play I‘ve ever read, and I can say now that I prefer politics-with-tragedy theme more than any others. After Julius Caesar, I think Richard III has become my new favorite. I enjoyed the clever speeches of Richard and the overall story.

The story begins when England’s two royal Houses of Plantagenet dynasty, Lancaster and York, have just put on a peace treaty after their long time war. It was now Richard’s brother, Edward, who ruled as King of England. Richard seemed to be bored at the idleness of peaceful time, and being encouraged by his high ambition, he invented a bloody strategy to snatch the throne from Edward, and at the same time thwarted the others whom he’s afraid would prevent his plan.

Helped by his friends—Buckingham was his chief supporter—Richard sent murderer to kill a lot of people, including his closest relatives. To highlight his cold heart, even the murderer—who supposed to kill two little innocent princes Prince Edward and Duke of York—felt remorse for a moment, before finally slain them; while Richard took it very lightly. Richard knew that to legitimately take over the throne he must make it desired by the citizens. He worked on it cleverly, and it rewarded him the throne of England.

At this stage he should have been invincible; however as he had reached the throne by deceitful ways, Richard became paranoid of his friends. Small mistakes in replying him could raise Richard’s suspicion; his Kingdom was built on the fragile foundation of fear. Resentful friends betrayed him and supported Earl of Richmond (Henry Tudor) in the Battle of Bosworth, where Richard was finally defeated by Richmond, and England was peaceful once again under King Henry VII (aka Richmond).

Despite of the lack of conscience, Richard’s diplomacy skill deserves two thumbs up. Twice he had had almost-impossible-to-win arguments. First, to propose Lady Anne—whose husband he had just killed—to be his wife. Second is to propose to the Queen (Elizabeth) to marry her daughter; while Richard knows how Elizabeth hates him so much. I know it’s quite absurd how those two ladies could ever agree with him; but nonetheless, Richard’s speeches are very clever and persuasive. And he won both of them! He reminds me a bit of Petruchio in Taming of the Shrew.

Beyond that, it is very hard to sympathize with Richard; he is just a true villain with corrupted soul from the beginning of the play. Nonetheless, Richard is the most interesting character in this play, and learning a bit of his history is quite enjoyable. Here we have battle, murders, a bit of romance, ghost apparition and superstitious, as always with Shakespeare tragedies. I have only one complaint. In the version I read (ebook from feedbooks), the mentioning of the characters are often inconsistent. One example, Lord Stanley is sometimes mentioned too as Derby, which is often confusing.

Four and a half stars for Richard III. You can read my further analysis on this play in my WEM posts.

Posted by Fanda Classiclit at 12:06 PM