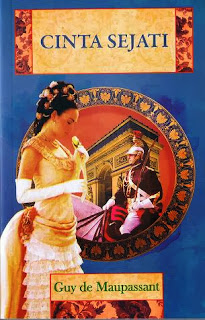 I must thank Serambi—one of Indonesian biggest publishers—for collecting and translating these nine fine treasures of Guy de Maupassant’s short stories. Being never a fan of short stories—although I still like to read them sometimes—I have not expected to like this book too much when I first read it. It was a gift from Serambi when they invited us in a gathering last year, and it has since been in my to-be-read pile. I included this book only to complete a challenge, and I have postponed reading it until last week. However, to my astonishment, I did really like it. Maupassant really deserves to be called “one of the fathers of the modern short story”, as his short stories are short but not without certain depth that would throw us in some deep reflections.

#1. Lasting Love (Cinta Sejati) – A story about unconditional love of a working woman, who loves a boy since she was a little girl, and despite of his refusal, loves him still until she dies. Her love is always giving, and never demanding. Her love is the purest kind of love: sacrificing for the happiness of the loved one, just as our Lord’s is. Note: Besides about love, Maupassant also criticizes human greediness and discrimination towards the poor. Score: 4.75 of 5.

#2. A Widow (Seorang Janda) – It is an unordinary story about an over-sentimental boy who dedicates his life only to love a girl, and is prepared to kill himself if she ever betrays him. Although it is similar with story #1, this is a selfish and demanding love. While dying for love to save others is noble, dying for love to force others to return it, is not love but greediness! I can’t but remember a song from Queen: Too Much Love Will Kill You. It will indeed! Score: 4.50 of 5.

#3. My Wife (Istri Istimewa) – This might be the shallowest type of love of all the stories. An easy going man accidentally enters—and sleeps in—a bedroom which turns out belong to the daughter of the host, in whose house he was invited to stay. This incident brings huge scandal and he is forced to marry the girl. The forced marriage turns out to be a happy one for the (lucky) guy. Note: Seems there’s no moral value in the story rather than: make sure you enter your own room when staying at other’s. But there is still a bit of love here; that love can grow from unexpected circumstances, even when you least expect it. Score: 3 of 5.

#4. The False Gems (Perhiasan Palsu) – I still cannot solve the mystery of this one. A respectable husband has a lovely wife who can provide a fine lifestyle over small salary, but has an acute fondness of false gems. After she died, the destitute husband wants to sell his wife’s false gems, but surprisingly finds that the gems are not false! I can’t imagine where she had gotten them; they can’t afford it, so it must be a gift, but from whom? Does it mean she has been cheating? That she got them from a secret lover? Is this just another irony, that infidel woman brings happiness while the loyal one is dull? Maybe, Maupassant wanted to criticize how men often praise money more than love. Score: 3.50 to 5.

#5. The Diamond Necklace (Kalung Berlian) – This is a reverse story from #4; about a wife of a moderate husband, who loves gems so much. To attend a grand party she borrows a diamond necklace from her friend, but alas! She’s accidentally lost it. Now they—husband and wife—tumble from moderate life to poverty. They struggle for ten years to return the diamond necklace, only to find out that the lost one is in fact false! Oh…what an irony! But I prefer to highlight the husband’s love here. He never reproaches his wife for having too high an ambition, not even for losing the necklace that ruins their life. This is another example of unconditional love. Score: 4.50 of 5.

#6. A Vendetta (Dendam Kesumat) – Now, this one is far away from sweet; it’s actually a macabre. This is an example how love that brings death instead of life. An old poor widow loves her son very much, so when he is stabbed by his rival in a duel, the mourning mother swears that she will avenge his son’s death. It’s not much for a macabre, really, but the way the widow execute the revenge is what shuddered me when reading. Is that really love? Absolutely not. But the ending is really great, and just reminded me of Poe! Score: 4.50 of 5.

#7. Babette – This one is about passionate love, or more precisely, madness in love. Babette is a woman who lives in a sanatorium for mental illness. She has a sexual appeal to men; and, just as women like her, she tends to bring catastrophe for men who desire her. It’s only another example of how love which is led by passion is disastrous; it’s not the real love, and can only bring death and sorrow. And the end is…another irony. I liked this one the least of all. Score: 2.50 of 5.

#8. Mademoiselle Fifi – Mademoiselle Fifi is actually far away from a girly story! It’s one of two great patriotic stories in this book. When Prusian troops are occupying France’s area, five of its high rank officers are boring, and called five prostitutes to entertain them. One of the officers, the cruelest of them, is nicknamed Mademoiselle Fifi since he has slender figure like a girl’s. He tortures the bravest patriotic girl of them, and the girl stabbed him with a knife, before she runs away and hunted by the army. It seems like an ordinary patriotic story, but the end—the slightly twisted end—is really touching. This story reminds us that patriotism has two sides: violence and love. It can done in a most risky act or just in silence. But both need a great courage to execute it. Score: 4.75 of 5.

#9. Boule de Suif – Another patriotic story about French prostitute, but with much deeper irony and a touch of humanity. Boule de Suif is the nick name of a female prostitute, she is on the way to Le Havre when France is colonized by Prusia. With her, some other rich and respectable couples, and two nuns, take the same chaise. Boule de Suif is shunned by the others because she is a prostitute, but nonetheless she happily shares her lunch basket with everyone when they don’t have anything to eat—and they gladly accept her hospitality. However, when a Prusian officer retain them all from leaving until Boule de Suif agrees to sleep with him, the others selfishly force her to sacrifice herself (she is a prostitute anyway, why rejecting this particular man?); while Boule de Suif resists because of her patriotism. This is the longest and deepest story of all, and the best choice to end the book. It tells about patriotism; hypocrisy; and about sacrifice. Score: 5 of 5.

Over all, this book is about love—all shape of it—and the consequences. There are also some irony in the humanity aspect, hypocrisy and greediness. In short, it’s about men and what are deep inside their masked appearances. What I like most from Maupassant are his irony, his intense ending, and his variety of theme with still one big issue: love and life. They are light at the start, but make you reflect at the end.

Posted by Fanda Classiclit at 7:33 AM