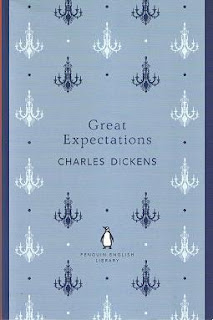 I don’t think one would be worthy to be called a Dickensian before reading Charles Dickens’ masterpiece: Great Expectations. I have just done it, so I’m now proudly calling myself a Dickensian! :) I don’t know why it took me rather long before I come to Great Expectations; maybe because I had long time ago watched its modern-setting movie adaptations—1998 version with Ethan Hawke and Gwyneth Paltrow— which was rather weird to me and I didn’t like at all (bookish lesson #1: do not watch a movie before you read the book!). Anyway, I have read it at last, and I admit now that enjoyed Great Expectations very much from the first to the last page.

Great Expectations was written as an autobiography of a fictional character: Pip. It was started when Pip was very young (around seven years old)—an orphan boy who was brought ‘by hand’ by his sister, wife of a kind-hearted blacksmith named Joe. In the real life, Pip might have grown up as a simple and humble blacksmith in a small village, marrying a simple and smart girl like Biddy, have kids, and would have finally buried in the church’ cemetery, just like his father. However, faith brought him to another scenario of life. I don’t know which one between the runaway convict and the eccentric Miss Havisham who had the most effect in shaping Pip’s life into its new mold. I believe both of them had an equal share, just like our lives molded by so many circumstances.

If little Pip had never been to Satis House, he would never had realized that he was a coarse and common boy, he would have never wanted more than life had been providing him up to that moment. And with that realization, come the need to have more. I’ve been reflecting, if Pip had never been granted with the great expectations, would he be happier then—as a poor boy who longed to have more but didn’t have the power to reach it? I think Pip would always be tormented by his own dream, he would always feel unworthy to love Estella, yet he loved her still.

The great expectations molded Pip’s life even beyond his own dream, from a coarse poor boy, he became a gentleman. He could now live the life he has always wanted. Yet, happier was he? At first everything was so fantastic, but after that Pip went through a lot of hard times that in the end he missed his old time again, and wished he’d never have met either Miss Havisham or Magwitch the convict.

Back to my reflection again, which one would be better for Pip? I believe the later one. The hardship opened Pip’s realization of what were true and what were abstract in life. Through the prosperity, and through Estella’s cruel and cold respond towards his love, Pip learned so many things in his journey to be a grown up man, that he finally knew by himself what he really wanted and what was the most important and valuable in life for him. The great expectations have built Pip’s personality much greater than if he lived as a blacksmith all his life.

To me, Pip is representing our own lives. He was not perfect, he made a big mistake as a matter of fact by being snob at Joe and Biddy, but he endured all his hard times very well, and he could learn from his mistake. I am happy because Pip was forgiving and grateful to his benefactor, despite all the negative consequences they had brought him. I think Pip know that people could bring you their influences, but at the end, it’s you who must make the final decision. Pip had made his own decision, wrong it was, but he learned, he regretted, he asked for forgiveness, he learned for the good.

[might contain spoiler] The copy I read (Penguin English Library) contains George Bernard Shaw’s analysis of Great Expectations and other Dickens’ works, and from it I know what kind of ending Dickens had originally put for this book, but was asked to discard it by Bulwer-Lytton. What we read now was the second ending Dickens wrote, but I somehow felt that it was still not a perfect ending after all. I would have preferred Dickens to end Pip and Estella’s love story for good, than being hung with: “I saw the shadow of no parting from her”. I felt that Dickens was forced to put a happier ending, but somehow did not want to explicitly make it a ‘they-lived-happily ever-after” tale-kind of ending. [spoiler ends]

Anyhow, I grant five stars for Great Expectations, it was a great moral lesson in a great story telling with aspects you can hope from a Victorian novel: romances, mystery, action, the gothic atmosphere of Miss Havisham's Satis House, and criticism to hypocrite society who over-praised wealth and gentlemanship.

I read this for: