Day 4 of Book Kaleidoscope is the freebie day, you can create whatever top five bookish criteria you want to feature. For me, it’s the underappreciated secondary characters. After having praising five ‘shinning’ male (or female) characters in Top Five Book Boy/Girl Friends, now it is fair to make room too for secondary characters to shine a bit in Book Kaleidoscope. They are not what the books are about, but without them, perhaps our heroes/heroines won’t be what they were. Here are my picks:

5. Nick Carraway in The Great Gatsby

I imagine Nick Carraway to be an innocent man who has been molded by his family to be a straightforward man with good moral. In the middle of the jazz age, while people seek only their own pleasure, Nick looks queer in his own principle. And that is why he is a perfect choice to narrate The Great Gatsby, to point out the irony between the good and the bad. Apart from the enigmatic Jay Gatsby, Nick should be appreciated more as he is the only one who could see what’s good in Gatsby.

It is quite funny that two of Moby Dick’s central characters are either the antagonist or only the silent narrator. So, if I must pick a favorite, it would be the secondary character, Starbuck, the only man in this novel who has good conscience. Starbuck is the chief mate, not distinguished in any sort, but he consistently keeps his conscience and principle throughout the story. Starbuck is the most intelligent man on board, apart from Captain Ahab. I admire him because he is very brave; has the courage to reprimand his captain because the captain would do something evil, even though he is alone (the others, either taking side of Ahab or don’t take any side). He is my hero from this novel!

3. Pierre Sandoz in The Masterpiece

Although The Masterpiece is regarded as Émile Zola’s most autobiographical novel, it is not in the main character (Claude) that Zola’s personalities appear; it is in the secondary character, Pierre Sandoz, Claude’s best friend. Sandoz is portrayed as an amiable and enthusiast young man, loves socializing and is always attentive to his friends. He loves to have small dinner party at his house every week, and the habit continues after he is married. To his friends, Sandoz is like a father or big brother who is always ready to protect them from world’s cruelty. It’s impossible to not feeling warm every time you read about Sandoz, because that’s how he is. I’m just wondering, whether Zola is really like a guy like that, if yes, I would love him ever more!

2. Robin Ellacott in The Cuckoo’s Calling

Robin is Cormoran Strike’s secretary. She is an attractive young woman, and is interested in detective and investigation. Robin is proved to be very efficient, sharp, and has a natural talent of a detective. She is a woman with principle and dignity; and although she is an employee, she let her boos know that she deserves to be respected properly. She does not like gossips or sneaking around his boss’ privacy, and although her boss is not treating her very well, she keeps defending him, as a secretary should do to her boss and her institution. I like Robin a lot, and really want to be like her. Talking about Robin, doesn’t she remind you of someone familiar….uhm…Hermione Granger, perhaps? So, do you think Emma Watson would be a good choice to play Robin Ellacott? :)

While David Copperfield—whose life is told in this book—has no distinguished personalities, I like Tommy (Thomas) Traddles much better than David. Traddles is good-humoured, lively person; he is persevere against hardship, and always knows what he is doing. Traddles is also a good friend, faithful, and always helpful towards others. In short, he is a guy who always makes our days fun. But more than that, Traddles can become serious and responsible while attaining some important matters. He helps his friends in needs silently and joyfully. Therefore I crowned him as… 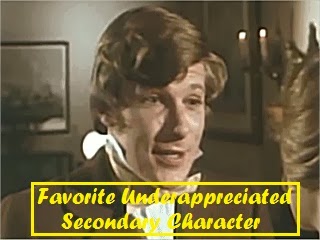 What are you featuring today in Book Kaleidoscope? Or do you have any favorite unappreciated secondary character too? Share it in the linky below!

Posted by Fanda Classiclit at 7:06 AM
Email ThisBlogThis!Share to TwitterShare to FacebookShare to Pinterest
Labels: Book Kaleidoscope