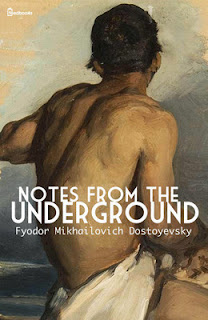 Although it is a very short book, Notes From Underground is far from light reading. I have started it last year, but had to stop at first chapter as I did not get what it is about. This year my friend enticed me to read it together, as it should be a good book. I took her challenge, and braced myself to read from the beginning, to get through the point where I have stuck last year, and to keep on reading—whether I understand it or not—as I believe I will get on it eventually after some chapters. Although I could not say I like it after finishing the book, I still feel grateful that I have at least tried it. It is my first encounter with Dostoyevsky anyway, and although I didn’t enjoy Notes From Underground, I like the way he writes, and would certainly read his other novels (I have Crime and Punishment in my TBR pile already).

Notes From Underground is told from first person point of view, and written as a kind of diary of the male narrator (I will call him ‘the narrator’). The narrator is a man of forties, lives in a wretched house which he calls the underground. He is a spiteful man, and from the beginning he has been bursting spiteful expressions about everything. He does not hate someone or something in particular, but he hates the world he is living. Odd as it was, I kept reading, and only after reaching the middle part, that I began to have a clearer image about this narrator.

He feels different from others because he is more intelligent and more superior to others. I think it is because he put himself above others, that others see him strange, anti social, and expel him for good. He despises the way they live, yet he yearns to be part of them; there is a paradox and self-denying here! The narrator often pictures it as tooth-ache; you hate the pain, yet you enjoy people’s attention; you want the ache stop, yet you regret it when it stops because you’ll lose people’s attention when you are recovered.

At first I thought this book is about a political criticism, but apparently it is more psychological (and philosophical?). I think it criticizes how men always want to be independent—which he calls freedom—while in reality, he also likes to be controlled; to be in orderliness. They despise law, but at certain point they demand to be regulated by it. Men are too tied to rules and are afraid to be free. They see people who don’t live by the same rule as weird. This is what the narrator feels; just because he doesn’t agree with others’ way of life, they see him as a fly. He longs to be free but couldn’t, and that makes him a despiteful man.

The narrator knows he is at an equal level with his friends but he always resentfully surrenders to their power. He does once an experiment by not yielding when passing a gentleman, shoulder to shoulder on the street; it is very difficult for him because in the end he always involuntarily yields. The narrator also talks much about consciousness. Here are several interesting quotes that makes you think more about human and society.

"To be too conscious is an illness.”

“Man has preferred to act as he chose and not in the least as his reason and advantage dictated.”

“What man wants is simply independent choice, whatever that independence may cost and wherever it may lead.”

“Man lives to make roads and to create, but why has he such a passionate love for destruction and chaos also?”

“He loves the process of attaining, but does not quite like to have attained.”

“You boast of consciousness, but you are not sure of your ground, for though your mind works, yet your heart is darkened and corrupt, and you cannot have a full, genuine consciousness without a pure heart.”

Can you guess what all these are about? I have a vague idea, but still could not grab the whole idea. I might not reread this book, but I would certainly love to read more from Dostoyevsky.

Three stars for Notes From Underground.