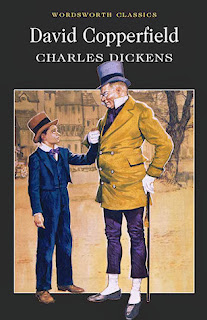 As soon as I read the last line, and closed the book for good, I could only think…how emotional David Copperfield is; it’s much more intense than any other books I have read so far by Dickens. Then I realized, David Copperfield is Dickens’ autobiographical novel, and so he must have written it deep from his heart. Things that might have been suppressed during his life, he poured down into this book. And so, I felt like Dickens himself was speaking to me; telling his unfortunate childhood, and how he became the man he was when he wrote this book. It became very personal and compassionate reading for me; and David Copperfield now becomes one of my favorites, and the most memorable from Dickens.

The book tells about the life of David Copperfield, from his unfortunate childhood—being an orphan; tormented at home by his wicked stepfather Mr. Murdstone; witnessing injustice and cruel treatment at school, his difficult runaway—to being in his aunt Betsey Trotwood’s custody, his apprenticeship time, until he came of age, marrying the girl he adored, and experienced the sweetness and bitterness of life. And during those times, David Copperfield—later on was also called Trotwood Copperfield by his aunt—met many memorable characters—some loved him, some despised him, some did him good, but some did him worse. Through them all, David (Trotwood) Copperfield strove to build his own character and to have a better life, just as Charles Dickens emerged as one of the greatest novelists of all time.

Strangely, unlike any other main protagonists in Dickens’ novel, I didn’t find Copperfield as distinguished as I expected. Yes, he is kind, friendly, helpful, persevering in hard times and has ‘undiciplined heart’—as Dickens put it—but other than that, he seems to be too plain; like there are no specific or unique personalities that distinguishes him from others. I even like Tommy Traddles more than Copperfield; he is more ‘humane’ than Copperfield here. And of course, I like Agnes Wickfield and Betsey Trotwood—who wouldn’t love to have an aunt like that?... :)

Mr. Micawber would have one of my favorites if not for his distressing law-styled letters—which gave me enough headaches to read. Oh, Mr. Pegotty is also my favorite, this is a genuine humble man with abundance of love in his heart; bless him for his sacrifices and forgiveness for Little Em’ly! Then there is the notorious Uriah Heep with his ‘umbleness’. I felt from the beginning that Uriah’s ‘umbleness’ was fake; and I always believe that people with that exaggerated humility must have been spiteful inside.

The best part of this novel is when young Copperfield must live alone by himself, beginning actually after her mother remarried. That was the starting point of his miseries, as young as he was then—10 years?—he must take care of his own and fed himself. As Dickens wrote it from his own experience, it becomes so intense. I could sympathize with Copperfield very much; and I often felt that I was reading Dickens’ own diary. I could also feel how his wound must have been re-opened while he was retelling those dark histories of his. I could only hope that Dickens’ emotional wounds would be relieved, at least a bit, after telling it to us then. And don’t forget about the sea storm Dickens wrote so lively, almost felt like reading a semi-thriller.

Knowing that this book is Dickens’ half fictionalized memoir, I can only wonder which one of the characters here that represent the true figures in Dickens’ life. Does, for instance, Dora represent Maria Beadnell, his first lover? At least I read about it in Wikipedia. But her death in so young of age, doesn’t it represent Mary—Dickens’ sister in law—to whom he became very attached—who died of an illness on her 17 years of age, and of whom—they say—Dickens has never recovered from his grief? And what about Agnes Wickfield? Could she be the representation of Ellen Ternan, whom was believed to be Dickens’ last lover? Or did he write DC before he met Tarnen? I really need to consult my Dickens’ biography again!

In short—as Mr. Micawber usually concluded his speeches :D—David Copperfield is one of the most memorable from Dickens, and I am grateful I have chance to read it. It was so enjoyable, and I think it is one book that I would love to reread from time to time, at least the one from Dickens.