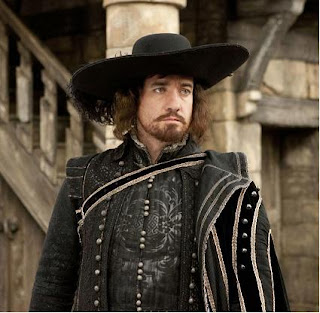 Since Twenty Years After is one sequel of a serialized novels under the title: The D’Artagnan Romances, I will analyze one of its numerous characters: Athos, not only from his appearance in this particular book, but I gather what I have learned from all The Three Musketeers, Twenty Years After and The Man In The Iron Mask—in which books I think the four musketeers had played their greater role.

From the four musketeers—Athos, Porthos, Aramis, D’Artagnan—Athos is the eldest in age, the noblest in personage, and the mildest in heart. No wonder, he was considered the leader of this group of loyal friends. D’Artagnan always placed Athos as a father figure in his heart, and had always loved him the most, compared to the other two. Athos too, often called D’Artagnan as ‘my son’. I see Athos as a fatherly figure from how he felt about Raoul—the young man he had taken under his guard, but who has a perfect resemblance with him (he was actually Athos’ son). It is interesting that after twenty years of separation, D’Artagnan, at their first reunion, saw Athos with great surprise…

“Strange thing! Athos had hardly aged at all…”

And what do you think had caused this renewed life of Athos? It is love! Yes, his love for Raoul was so great that I wonder, could it be a father has such an emotional love that—I think—resembles a love of a mother to a son? And more than love, I can say that Athos adored his son. This, which I see more in The Man In The Iron Mask, I think, was the one of Athos’ weaknesses. In short, I think Athos has a tender heart, too tender sometimes, so that when he should act firmly, he failed to do so because of his tender heart, which might cause a bigger risk for him. This is revealed when Athos and Aramis met the son of Milady who wanted to take revenge. Aramis in his sharpness had prepared an ambush, but Athos forbade him to kill an innocent man, although later on he regretted his tender-hearted. For an ordinary man, of course the quality Athos had in him is the highest we can expect from a man, however if I put his tender heart in his chevalier context, then I think it could be a weakness.

If Athos has one weakness, he possessed a lot of strong personalities. He is the noblest man in the Kingdom, the bravest and one of the best swordsmanship. The Comte de la Fère—Athos’ real name—has a noble appearance in him, that everybody who looked at him would directly reckon that he was a nobleman. But the nobility he possessed was not only in his appearance, but more in his soul. Let’s take a look at one of Athos’ advice to Raoul…

“Raoul, learn ever to separate the king and the principle of royalty; the king is but man; royalty is the spirit of God. When you are in doubt as to which you should serve, forsake the material appearance for the invisible principle, for this is everything. Only God has wished to render this principle palpable by incarnating it in a man.”

Athos believed that he should serve the principle of royalty—which reflected the spirit of God—instead of the man who lead the royalty, who could have been corrupted in soul. It was perhaps the reason why he rejected D’Artagnan’s offer to serve Cardinal Mazarin.

Athos was also a loyal and trustful man who appraised friendship higher than anyone else. When there was a dispute between the four musketeers, it was Athos who stood up to save them from fighting each other. I can say that Athos was the key of their unity. You can read what he has said at the crucial moment in my former post.

Until now I always see Athos as a calm, serious man with self control, pure in heart, high in dignity, and always keep his own principle. However from Twenty Years After I began to know more of him. In The Man In The Iron Mask, I just found out that Athos has a son, and ever since I kept wondering, who might be Raoul’s mother. I never think it was Milady, but I have never read that Athos had another mistress. The answer revealed in this book. I will not spoil the truth to you J, but just want to say that…ehm…I have never thought Athos as a wild young man (he has always been a wise man, even when he was a young musketeer!), but..that’s the truth, and it only make me see Athos as a man J. Oh, and have I mentioned that Athos was the most handsome of the four musketeers? Here I give you the clue….

In short, Athos was never my idol from the four musketeers, and the farther I read Twenty Years After, the more I see him getting weaker. Athos seemed to be indifferent to his surroundings, and just focused on his beloved son and his noble principles. I see him made blunders several times in the four musketeers’ adventures, that once made D’Artagnan and Aramis lost patience on him. He also became more ‘divine’ than ever, that a stabbing or a murder scene could trouble him. I mean…it’s perhaps good to be closer to God or to be ‘more Christian’ (even more than the Abbe D’Herblay! J), but come on Athos, you are a chevalier! While reading bible, I expect to read the deeds of saints, but this is a heroic-adventure novel, and I definitely hope for some more heroic actions! So, I’m sorry, I lost my respect to Athos here, maybe you’re just getting old for a chevalier!

Posted by Fanda Classiclit at 7:00 AM
Email ThisBlogThis!Share to TwitterShare to FacebookShare to Pinterest
Labels: blog hop, Twenty Years After