Talking about Little Nell from The Old Curiosity Shop, is impossible without talking about her grandfather, for everything that happened to poor Nell throughout the book must have been related to her grandfather, the owner of an old curiosity shop in the suburb of London, with whom the orphan Nell lived and the only one Nell ever loved. After Nell’s parents died, her grandfather took over the responsibility to take care of her. I can see that he loved Nell very much.

“Do I love thee, Nell,” said he (the grandfather). “Say, I do love thee, Nell, or no?”The child only answered by her caresses, and laid her head upon his breast.“Why dost thou sob,” said the grandfather pressing her closer to him. “Is it because thou know’st I love thee, and dost not like that I should seem to doubt it by my question? Well, well—then let us say I love thee dearly.”“Indeed, indeed you do,” replied the child with great earnestness.

Basically Nell’s grandfather was a good man, he was just an old man who loved his grandchild, and tried to do something to give her a bright future. Unfortunately, he had chosen the wrong way to gain it. Couldn’t be patient to run his old curiosity shop business properly, he tried a faster way to earn money, by gambling. I don’t know which one comes first in Nell’s grandfather’s case, the gambling-addict or the greediness. However I can say one thing about him, that in spite of his kind heart, Nell’s grandfather has an obvious weakness, he could not resist the temptation of gambling though he knew deep in his heart that what he did was wrong and that it would make Nell sad. 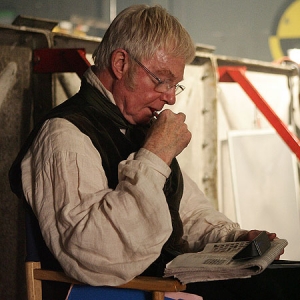 I was torn between love and hate with the old grandfather at first, but reading along this book I’d rather think that he used Nell’s future to be his reason for gambling. Perhaps at first he was really a good grandfather who earnestly loved his grandchild, but having tried gambling as a desperate way to enrich himself—in his obsession to fight the poverty, and to make Nell become a lady or a woman who have a better place in society—he became addicted to gambling. It seems from the book that Nell’s grandfather has never won, but I think it’s hardly possible that a man should lose again and again. I think he sometimes won, but he used the money he won to raise his bet, until he lost all his money. And the same as a drunkard, an addicted gambling would do anything to get money, robbing if he must! 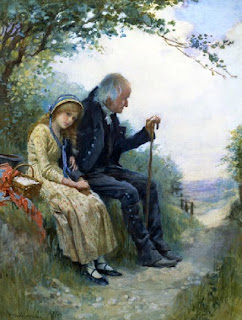 Although I felt pity to Nell’s grandfather—and all other men with same problem—I can’t sympathize with him. I do believe that men have their weaknesses, and must try to improve all their lives, but deceiving himself that he is doing it for the sake of the one he loves, well…it’s unacceptable for me. So, old and pitying Nell’s grandfather is, I can never love him, especially that he had been in many times disappointing Nell—and had been reminded by the little child—but kept doing it and deceiving himself and his grandchild. No, I can’t but blame him for all the sorrows that Little Nell must have endured.

Posted by Fanda Classiclit at 7:14 AM
Email ThisBlogThis!Share to TwitterShare to FacebookShare to Pinterest
Labels: blog hop, The Old Curiosity Shop