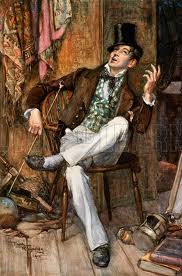 Usually I limit my Character Thursday to maximum two characters from one book, to avoid over-exposing too often one particular book, which I’m afraid will bore my followers. However this time I will make an exception, I am picking another character—the third—from The Old CuriosityShop, after Little Nell and her grandfather. Why? Because I think Richard ‘Dick’ Swiveller is a unique character—the only one who experienced a character development in this book, so he deserved to be exposed here.

Dick appeared at earlier chapters only as a comical accessories to the main characters. He was brought to the scene by Fred Trent, Nell’s big brother who suspected that their grandfather was actually a very rich man, and all those times had hidden his treasure to be given to Nell when she has grown up. Fred was a bad boy, and in order to persuade his grandfather, he brought his flamboyant and poetical friend, Dick Swiveller. So, we can assume Dick to be one of antagonists, as besides Fred, Dick also worked together with Quilp, the main antagonist of this story.

Dick’s personality is quite a unique and unforgettable one, he is not as perfect as Nell and Kit—I personally never like perfect characters too much, they are only in tales, not in real life—but Dick is not a totally wicked person too as Quilp, he’s just a person who praised pleasure and wealth, not a hard-worker, an opportunist, and was quite indifferent to others or to the world. Dick liked to imagine himself as a rich person, he used to mention his apartment as ‘apartments’, and imagined his bed as a bookcase. He depended his life on his rich aunt’s mercy, and although was not holding any pence in his pocket, he would fulfill his expensive appetite with a luxury dining from different restaurants (and left a lot of debt traces in almost every dining place in London).

As an easy-going person, Dick was very easy to be tempted. When Fred offered him to marry Little Nell to gain her inheritance, Dick—without many considerations—decided to break up his present relationship with Sophie Wackles. Quilp has also used him for his own plan, by getting Dick a job in Sampson Brass’ law office. The indifference in Dick’s character was clearly stated in his own expression:

I have thought Dick Swiveller as and would be the little villain, someone who would execute the plan to get Kit to his downfall, however something then happened. One night Dick met the little servant of Brass family, a dirty poor-nameless-abused-and-neglected girl who used to live downstairs. His involvement with the Marchioness—a nick name Dick had given the servant girl—was later on proved to be the turning point of Dick’s character development, from an indifferent person, to become someone with more affection for others. He was the one who took the responsibility to take care of Kit’s mother and family when Kit must went to jail. And I think, somehow, Dick felt that Kit was actually innocent, and that there was something wrong with his bosses. Dick also sent a cheerful present for Kit in jail. He was now a kind-hearted person with care for others. His heroic action, however, did not occurred until he suffered a sever fever that almost took his life, if the poor and sweet Marchioness did not take care of him like a mother and nurse. In his sorrow, all his concerns were on the falsely accused Kit. He—along with the Marchioness of course—was the key actor of Kit’s release.

I was wondering, what was the cause of Dick Swiveller’s change? I guess the poor life of the Marchioness was the trigger. Dick—I think—was quite deeply touched by the injustice and abuses that the Marchioness had lived her life with. And from there, Dick must have changed his mind about the Brass family, and thus saw things with a different point of view, and lead him to doubt that Kit was guilty. After Marchioness scene, Dick’s heart was easier to be moved by a helplessness situation, such as happened to Kit and his mother.

So, here was Richard ‘Dick’ Swiveller, from zero to hero, and although his change was not so drastically as Sydney Carton in A Tale of Two Cities, but still, he deserves to be praised as a hero in this story. And I’m glad that in the end Dickens gave him a woman to love and love him in return, someone who shared his eccentricity and interests. I must admit that I would miss Mr. Swiveller’s character, he’s someone who had given this story more color and more cheerfulness within the gloomy atmosphere we felt with poor Little Nell and the grotesque wickedness of Quilp. Dick Swiveller was indeed the savior of The Old Curiosity Shop, to make us love it more!

Posted by Fanda Classiclit at 7:00 AM
Email ThisBlogThis!Share to TwitterShare to FacebookShare to Pinterest
Labels: blog hop, The Old Curiosity Shop