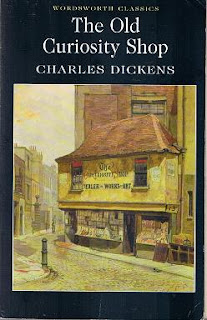 Little Nell is a fourteen years old girl who lived in poverty with her grandfather, the owner of a small curiosity shop in London. She was described as a very beautiful little girl, polite and kind hearted child. Nell was an orphan, and thus only has her grandfather who loved her and whom she loved very much. As a child and then teenager, Nell had to go through many hard times. His grandfather often went at night for a mysterious work which—he said—was for Nell’s future good, leaving Little Nell at home, lonely, without anyone to protect her, always felt anxious that something bad might happened to his grandfather. Maybe, all these hard times strengthened her character, so that Nell—despite of her innocent appearance—could think as an adult.

She was often wiser than her grandfather, and it was more often than not, that it was Nell who took the role of leader and protector of the family, instead of the grandfather. Nell was soon alarmed when their new friend acted strangely, an intuition that only a grown up woman can own. During their escape from some bad people, Nell was so brave and resilient that though she was scared and worried, she could always encourage her grandfather. 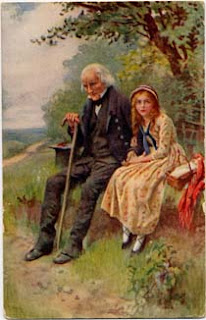 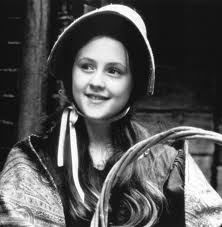 Although she was used to live in poverty, the most important thing for Nell was not wealth or comfort, but love and affection. I have written about how Nell would prefer to beg on the road if that means she could be together with her grandfather, than to live in their dark and melancholy house.

As usual, Dickens always created a perfect-too-good-to-be-true character such as Little Nell in his books. I have met Oliver Twist before, and so am not surprised to meet Little Nell. Yes, it’s seems unreal, yet we can still learn a lot of things and values from lovely Little Nell.

So…who is your Character Thursday this week?

Posted by Fanda Classiclit at 9:03 AM
Email ThisBlogThis!Share to TwitterShare to FacebookShare to Pinterest
Labels: blog hop, The Old Curiosity Shop