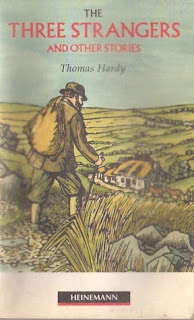 After being overwhelmed by my last classics reading, I opted to switch temporarily to short stories. Still in A Victorian Celebration, I have picked several works from several different Victorian authors. The first one is Thomas Hardy. I have planned to read Tess of D'Urberville, but before that I would like to first have a feel of his writing, to decide whether I'm going to like it or not. And this is what I have picked from Hardy, The Three Strangers, which was written in March 1883.

There was once a shepherd who lived in a lonely cottage on a coomb of a country. At that particular night, rain had poured heavily, but it did not prevent the shepherd's family to hold a jovial party. It's a christening party for their second child. Twenty people were invited, and the party would have been enjoyable, if there were not a sudden knock at the door...

A stranger was at the door, looking for a shelter from the heavy rain; and the shepherd, being in a jovial mood that night, invited the stranger—who chose to sit at the chimney-corner—to join the party. A few moments later there was a second knock at the door by another stranger. This man—who was also looking for a shelter in his way to Casterbridge—was also invited by the host. The two strangers got acquainted each other in no time, they drank the shepherd's homemade mead together, and were singing together, while came another knock at the door...

The third stranger, upon looking at the other two strangers, got pale and shocked, then quickly left the shepherd's house without any explanation. At that time the guests had realised that the second stranger, the cinder-gray man was actually an executioner who must go to Casterbridge jail to hang a poor watch-maker who had stolen a sheep from a farmer.

A little moment later a gun shot reverberated through the air, a sign of a prisoners escape from the jail. That should be the man whom the second stranger must hang the following day. A search was immediately conducted, and I think you can already guess, that the prisoner must be one of three strangers. The question is, which one?

This is not a mystery story, though it's quite interesting to closely follow what should happen next during the search, to pay attention to the three strangers--who's who, and to guess who had lied and who had told the truth. However, I think Hardy had not intended to create a mystery in the first place. I suspect it's his way to criticize the law. Did the poor prisoner really deserve to be hanged for his crime, stealing one sheep because he was so poor? It's also interesting how Hardy mocked the law enforcement through this story. One of the party guests who joined the quest of the escaped prisoner was a constable, who was pictured so stupid and absurd:

In the scene when the men had found the fugitive and were about to capture him,

Constable: "Your money or your life!"
One of the men: "No, no, tisn't our side ought to say that. That's the doctrine of vagabonds like him, and we be on the side of the law."
Constable: "Prisoner at the bar, surrender, in the name of the Father—the Crown, I mane!"

This was my first work of Thomas Hardy, and I can sense a little of his writing style which I quite like. However, unlike Dickens, his uses of many unfamiliar words have been quite disturbing me, especially since English is only my second language. Of course I can always search for those words in dictionary or Google, but I think the effort does not worth for a single short story! It just makes me take a second thought before moving to Hardy's novel, I mean I still want to read Hardy, but not in the near future. Anyhow, I still find this short story a well written one; short, yet I learned something from it. Four stars for Thomas Hardy!

[I read ebook version from Project Gutenberg]
This post is included in Short Stories on Wednesdays
Posted by Fanda Classiclit at 10:22 AM
Email ThisBlogThis!Share to TwitterShare to FacebookShare to Pinterest
Labels: 19th Century, England, Short Story, Social, Thomas Hardy