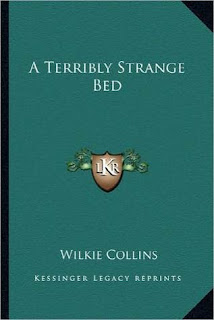 When I first found this short story, I was wondering whether I am going to like it. The title is not really promising—‘A Terribly Strange Bed’? What would that be about? However, being determined to read short stories from authors whom I have never read before for A Victorian Project, I decided to download the ebook, and then read it right away. After finishing it in two days—I read it at office ours, as it is in Words file—I have already fell in love with Wilkie Collins!

The story was set up in Paris. Two English men were travelling to the city of light, and in the search for a night amusement, they went to a small gambling house in a rather slum area of Paris. The narrator—Mr. Faulkner (Collins revealed the name only at the end of the story)—was not a genuine gambler, he did gambling occasionally just as a mean of amusement. However, that certain night appeared to be his lucky night, for he kept winning hugely at the ‘Rouge et Noir’ game. Left alone in the gambling house, an old soldier persuaded him to drink champagne, and got him drunk. Afraid of his security, the old soldier advised him to spend the night at the inn in the upstairs of the gambling house, which he fully agreed.

After securing the money bag under his pillow, locking and bolting the door and checking on piece of furniture to make sure everything was safe, Faulkner was trying to sleep, but failed. And suddenly—this was where the thriller began—something strange happened. The man in painting—which he had contemplated in his desperate effort to sleep—suddenly “lost” his hat. What has happened? And did he felt that the bed was moving?.....

This is the first time I read Wilkie Collins, and although this is only a short story, I can get a feel of his writing style. The story theme itself reminds me of Poe’s thriller—although Poe’s are much more gripping. **spoiler** In particular, this reminds me a little of Poe’s The Pit and The Pendulum, both are about a murdering machine, but Pit is much darker and terrorizing, while Collins wrote it more as a mystery thriller or crime. **spoiler ends**

I like how Collins described the state of Faulkner’s mind wonderfully, especially because it is written from his own point of view. The scene on the bed where Faulkner could not get asleep, for example; inexperienced author might describe it in few words only to say that the man has tried but he can’t get to sleep. But Collins took us to be in Faulkner’s place, we can feel ourselves how desperately it might be for him.

“…Every nerve in my body trembled—every one of my senses seemed to be preternaturally sharpened. I tossed and rolled, and tried every kind of position, and perseveringly sought out the cold corners of the bed, and all to no purpose. Now I thrust my arms over the clothes; now I poked them under the clothes; now I violently shot my legs straight out down to the bottom of the bed; now I convulsively coiled them up as near my chin as they would go; now I shook out my crumpled pillow, changed it to the cool side, patted it flat, and lay down quietly on my back; now I fiercely doubled it in two, set it up on end, thrust it against the board of the bed, and tried a sitting posture. Every effort was in vain; I groaned with vexation as I felt that I was in for a sleepless night.”

The way Collins led his readers to the terror scene also deserves two thumbs up. The gloomy room, the dark old picture hung on the wall (of a Spanish desperado waited to be hanged), and the moonlight that was shining into the room through the window, they all brought us to a dark gothic scene, as if those are where the exact terror would come from, which in fact they're not. However, without those aspects, this story would certainly lose its grip.

Five stars for Wilkie Collins! And after this I’d like to read more of his books.

[I read ebook version from world-english.org]

This post is included in Short Stories on Wednesday