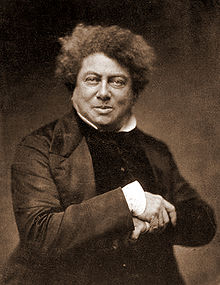 Having his works being translated in almost a hundred languages and have been inspired more than 200 motion pictures, we can say that Alexandre Dumas is the most widely read French authors in the world. Born on 24 July 1802, his real name was Dumas Davy de la Pailleterie. His grandfather is a French nobleman, while his grandmother was a slave who born from mix French and African ancestor. Dumas’ father—a general in Napoleon’s army—married to an inn keeper’s daughter. When Thomas Alexandre Davy de la Pailleterie—Dumas’ father—joined the army, he took his grandfather’s name Dumas.

Unfortunately, Dumas was born during the hardest times of the family, his father being imprisoned, then return home in poor condition, both in health and financial state. After his father died, Dumas’ mother—incapable of giving him proper education—encouraged her son to read everything they could obtain, and told him stories about his late father’s bravery during his service to Napoleon, which later on inspired Dumas’s vivid imagination of adventures.

After the restoration of the monarchy, the twenty years old Dumas—having inherited his family aristocratic reputation—moved to Paris and started a career at Palais Royal in the office of Louis Philippe, Duke of Orléans and later become King Louis. During this time Dumas began to write for magazines and plays for the theatre. Although he was later famous as a novel writer, Dumas had been famous as a successful dramatist before writing novels. He performed many romantic historical dramas on the Paris stage, and later founded Théâtre Historique at the Boulevard du Temple in Paris, which later became Opéra National.

During the early of Victorian era, serial stories became a new trend; and Dumas—saw an opportunity for his career—re-wrote one of his plays into his first serial novel, which was soon followed with his other novels. In writing the novels, Dumas used to use services from assistants and collaborators. One of them was Auguste Maquet who assisted Dumas in outlining the plot of The Count of Monte Cristo and assisted him in The Three Musketeers. After the success of both novels, Dumas bought a land and built a château named Château de Monte Cristo (nicknamed Château d'If). Although he had gained a great deal from his writing, Dumas did not maintain his financial very well; he spent a lot to women and his guests at his château has taken advantage of his generosity. Dumas then sold his château and fled to Belgium to escape his creditors. The château has been restored and is now become a museum, opened to public.

After his marriage with an actress, Ida Ferrier, Dumas kept his love adventures with some women. From them he had at least four illegitimate children; one of them was Dumas’ son with a dressmaker called Marie-Laure-Catherine Labay. In the future—bearing the name of his father—Alexandre Dumas, fils would follow his father’s step to become a writer and playwright.

Alexandre Dumas, père died on 5 December 1870 at his son’s villa. At first he was buried in the cemetery of Villers-Cotterêts, however at 2002 President Jacques Chirac instructed to move his cemetery to the mausoleum of Pantheon, to be placed among his fellow greatest French authors Èmile Zola and Victor Hugo. During the ceremony—which was broadcasted on television—four Republican Guards dressed as Athos, Porthos, Aramis and D’Artagnan brought Dumas’ coffin in a procession towards the Pantheon. In his speech, Chirac also pronounced that ‘a wrong had now been righted’ which was related to the racism thoughts against Dumas (being a mixed race). About this, Dumas himself have written a particular short novel titled Georges, which addressed some of the issues of race and the effects of colonialism. Dumas once remarked to a man who insulted him about his mixed-race background: "My father was a mulatto, my grandfather was a Negro, and my great-grandfather a monkey. You see, Sir, my family starts where yours ends."

Some of Alexandre Dumas’ most famous novels:

Posted by Fanda Classiclit at 8:07 AM
Email ThisBlogThis!Share to TwitterShare to FacebookShare to Pinterest
Labels: Alexandre Dumas