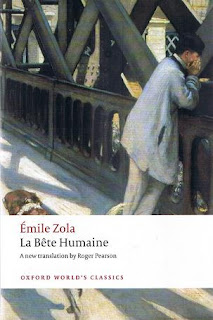 In all human beings there is always the beast within. That’s what Zola wanted to remind us in La Bête Humaine (= the human beast). There’s always the animal side in us which lay side by side with the human conscience deep in our soul. In some people, it might perhaps never been unleashed, and so they would die honorably after living a decent life. However in most of others, this human beast could anytime leap out of them uncontrollably. The interesting question is, why some people can control it, while others can’t? Moreover, could it ever be controlled? And Zola took us to analyze these in this psychological thriller novel.

Jacques Lantier (son of Gervaise and Auguste Lantier—L’Assommoir; brother of Étienne—Germinal and Claude—The Masterpiece) is the main “human beast” in this story. He was an engine-driver of a French railway company; and was a handsome, educated and skilful worker indeed. From the first time Jacques had noticed that in time to time a kind of uncontrollable passion to kill a female would attack him; and when the seizure came, the passion would control his entire mind and body. For the time being he lived a healthy life as there was no female in his life, other than ‘La Lison’, his locomotive engine. But one day when he was visiting his aunt, Jacques was seduced by his cousin Flore who had been falling in love with him for a long time. Then and there the seizure came, and in his runaway of the scene, Jacques witnessed a man cutting another man’s throat in a fast-running train. As a witness in the murder case, Jacques came to the acquaintances of the murderers, Roubaud and his beautiful wife Séverine. When Jacques started to have passionate love towards Séverine, the beast was awaken there within the recess of his soul, waiting for the right time to once again control its master.

No wonder that La Bête Humaine was called the most brutal novel of Les Rougon-Macquart series. Before 60 earlier pages elapsed, we have been offered not less than three murder scenes or murder attempts by three different characters to three different victims. And the murders continued on till the end. Most of all were related to or caused by sexual passion, while others were moved by greediness. At first I was wondering whether the poverty was the root of these beasty passions; when human passion was imbalanced with their brains. However, the murderers came from both the intellectual workers and the uneducated ones, so it’s not that.

Moreover, Jacques was portrayed as an educated man, a dedicated worker with a polite manner. On several occasions, his education and his conscience prevented him to do such low-moral deed, and that’s why Jacques could not kill the man he ought to. But then, Jacques was not a real murderer, he won’t kill a man just because he needed to. When the urge to kill came, it was the ‘beast within’ which dominated his logic and conscience and took over his body. So, whence did the beast come, then? From the way Zola based the Rougon-Macquart series on scientific (taxonomy and physiology) point of view, the answer could be in the hereditary moral corruption. From Jacques’ part, he inherited it from his ancestors—whom were portrayed as ‘a cave man lifted his prey on his shoulder’—and especially from his drunkard parents. Now, did that make sense?


I’ve been thinking quite a lot after finishing this book. Basically I can accept Zola’s theory of the human beast, the savage ‘animal’ passion in human. However, I also believe in the human free will; the free will God had granted us since we were born. Physically, human kind had perhaps evolved like animals—as Darwin put it—but one thing is sure, God granted us first, the divine spirit in our soul (conscience) to fight the animal passion, and second, the free will to use or not use it.

In this book, Zola focused solely on the losers, those who failed to use their consciences when deciding the murders. Actually, I have had a very slight hope that Jacques would conquer the human beast somehow, but having been knowing Zola much better now, that would be in vain. I know that Zola always intended to capture the worst of human being in order to awaken us to not falling in the same gutter. Jacques, Roubaud, and several other murderers in this book became murderers because they had both the human beast AND the conscience within, but nurtured the former and shut up the latter. Let’s take Jacques for instance, he knew perfectly well why and when the ‘beast’ would show up in him, i.e. when he was sexually aroused by a woman. Jacques was intelligent enough to know that the only thing he must do to prevent the beast from showing up is to stop making up with women and focused solely his passion to his works. It would need a huge effort, but again, we always have the choices, and the free will to choose one. So, we could not put the blame only on the ancestors, as if some of us were doomed to have ancestors with bad moral, and so we can’t do anything but to accept it, no! We can always fight it. The only question is, would we?

Over all, Zola wanted to point out that the rapidly growing industry turned out not to be in line with overall human civilization. With the new century lurking, came the moral decadence; with the prosperity in some area, came the poverty in others. Zola pictured the irony as hundreds and thousands people rushed in express trains to welcome the modernization without ever realizing others around them who struggled with poverty and beasty passion; poor people whom they must have seen from their window for split of seconds, but whom were unrealistic for them. The cost of modernization was often the humanity!

"People go fast now, they know more... But wild beasts are still wild beasts, and they can go on inventing bigger and better machines for as long as they like, there'll still be wild beasts underneath there somewhere."

And the train of modernization would rush pass the humanity with its indiferrence and dignity; without recognizing that in the deep root of the humanity something would soon emerge; slowly and silently, painfully and terrifyingly....the human beast!

I must thank Zola for this brilliant and appalling book, which allowed me to think and reflect a lot. But besides that, I also loved Zola’s vivid portrays of the railway industry; the busy lives around the railways and the clanking and the hissy voices of train coming and going, leaving one civilization to another. But most of all, I loved how Zola personified La Lison. I was actually deeply touched at the ‘death’ of La Lison—imagine when I was weeping over a locomotive! But that’s just the genius in Zola. They are so vivid and so beautiful. Yes, only now I realize that engine can be feminine. The scenes of La Lison went through the snow will always be my favorite! If other writers 'wrote' beautiful passages, Zola beautifully 'painted' them in his novel as a canvas. I doubt if any movie director could even capture that scene into movie in the perfect emotion and feeling as Zola wrote it; only Zola can do it, in his perfect painted novel!