Arthur Clennam is the main male protagonist in Little Dorrit. I choose him to be featured in Character Thursday this week instead of Little Dorrit herself, because I found an interesting aspect in his personality. Brought up by the contrast combination of an iron-woman mother and a weak father in a dark and gloomy house full of hatred and revenge atmosphere had affected Arthur’s character as a man. I imagined petit Arthur as an unhappy and brooding child, constantly feeling unsafe and unsure, afraid at every action that his mother would scold him.

Fortunately his father took him when he has grown up to China to work as an apprentice in their family business. I imagine, being away from that horrible house and his strict and loveless mother, and lived in a loving surrounding of his father, has altered his personality to be much better. When he returned to England after his father died, Arthur has become a tender and loving person, though his day-dreamer and shyness aspects were still there—which I suspect as the result of his mother oppressive way of bringing him up.

What I like from Arthur is his sensitiveness towards injustice. Bringing home a remembrance token from his father to his mother, he insisted to be informed whether their family had been done any injustice to others while doing business in the past; that he would like to repair that if any. Arthur showed that manner too in Dorrit’s imprisonment. He was the originator of Pancks’ investigation in the case, which led to the revealing of Dorrit’s unexpected fortune.

What I doesn’t like from Arthur is his over-sensitiveness—or may I say melancholy?—thoughts of himself. After being rejected by Minnie (Pet) Meagles, he considered himself too old for love—and he was only forty!—and although he felt something special towards Amy Dorrit, he pushed aside the idea of love, and assured himself that it was a feeling of protection, or even more a fatherly affection to a child—which led him to call Amy as ‘my child’. Oh Arthur…how foolish you were! 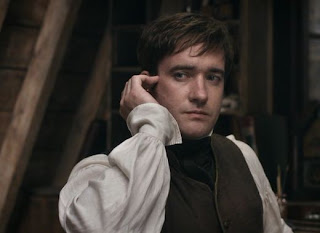 All in all, I learn from Arthur Clennam’s story that one’s character was much influenced by how he/she had been brought up. Unhappy characters usually come from unhappy atmosphere in their home. Even if they have experienced much better life conditions after that, small fragments of the unfortunate past might still exist in who they are today.

Posted by Fanda Classiclit at 7:00 AM
Email ThisBlogThis!Share to TwitterShare to FacebookShare to Pinterest
Labels: blog hop, Little Dorrit