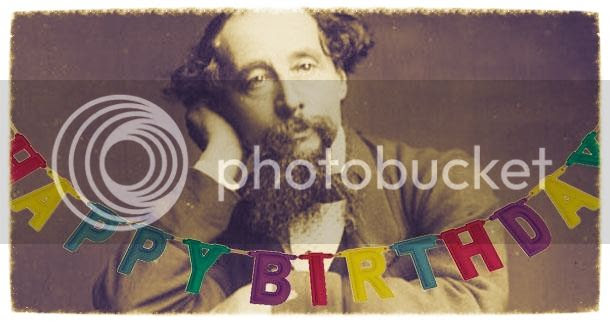 You know, I have a crush on Matt Damon since The Bourne series. Ever since, I’ve been going through some of his movies. So, when I saw the DVD of Hereafter on a sale last year, I grabbed it at once. Now, I have watched it twice, and loved every scene of it! Hereafter is indeed a good movie, but what amazed me most is when I found Dickens there. The protagonist, who is a handsome psychic—played by Matt Damon—is a huge fan of Dickens. I found it out first at the scene when he was lying down on his bed listening to his recorder after being distressed over something. The lulling voice from the recorder was reading something, and although I didn’t recognize the text, I vaguely think about Dickens; I don’t know, maybe it was the style. Let me quote part of it here:

"We might have gone about half a mile and my pocket handkerchief was quite wet through, when looking out, to my amazement, I saw Pegotty burst from a hedge. She jumped up into the carriage. Not a single word did she speak…. I noticed one of her button rolling around on the floor. I picked it up and treasured it as a keepsake for a long time." 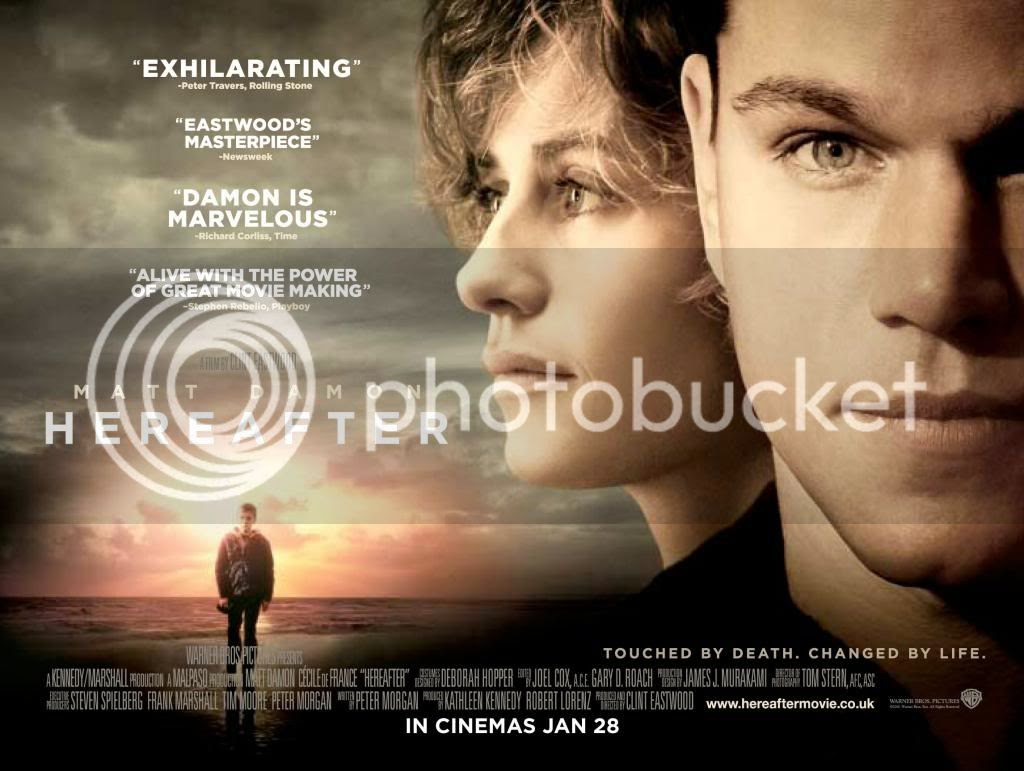 I still did not recognize what it was until the second scene where he (again) was listening to the same kind of reading. And this time I caught a specific word: “Mr. Micawber”. And there it was, no doubt that it was Dickens’ David Copperfield readings that he was listening to. Wow…I always found it amazing when a book or a movie discussed about a book or an author that I like to read. I mean, like Matt Damon..oh..I mean the character he played :), I am a fan of Dickens too, though I can’t say “huge fan”, because I don’t know whether I can listen to a reading of his book without falling asleep (the sound was soothing indeed!).

Anyway, the next scene was more interesting, rather funny in fact… The psychic’s girlfriend came to his apartment for the first time. She looked at his childhood pictures while having the ‘oh…how cute you were’ kind of conversation. Then she turned to another room and, pointing at something on the wall, suddenly said: “Who is this? Is this some kind of ancestor?” Just a second before the camera moved to the picture, I already knew who that would be; it was the picture of Charles Dickens! I only imagined, if my boyfriend did not know Dickens and had mistakenly identified him as my ancestor, he won’t look attractive to me any more… :)

And what did Matt D (let me use that name, OK? I love the name, and I forgot the character’s name anyway…) say to her about Dickens? “You know, people go on and on about Shakespeare, and it’s great, of course, but Dickens….” (he did not continue, but I know what he meant, I feel the same way too—Dickens is something special, although it’s difficult to explain the reason just in one sentence, you gotta read his books and find it by yourself).

Still more….there was a scene where Matt D went to a house, and I soon realized that it was Dickens museum—the 48 Doughty Street museum where Dickens lived with Catherine and their children! Matt D has joined a city tour, and together with him I felt like I went there myself. The house was surprisingly quite smaller than I thought. I don’t know how twelve people can live together under that roof? The tour guide brought us to see Dickens’ first copy of A Christmas Carol and The Mystery of Edwin Drood, and his working room, his desk and the famous painting, Dickens’ Dream. If you could only see Matt D’s face, he seemed to be at his own home, where people he loved used to stay there, he touched the desk, the painting, as if he could remember every happy and sorrow memories in the past radiating from the materials. 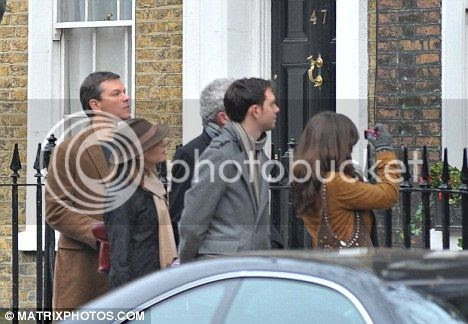 On another scene, Matt D was visiting a Dickens live-reading by Derek Jacobi (Jacobi played himself in this movie) in London book fair. You should see Matt D’s face when he’s listening attentively to it (this time it’s Little Dorrit), and when the reading finished, Matt D applauded with almost childish amusement; his eyes lit up, and he seemed to be forgotten his surround. Wow…I have never encountered such adoration for certain author, that when one listen to the story told by someone else, he/she would react that way. It makes me think, have I the same level of adoration for my favorite author? Or in other way, which author have I given such adoration to? Sadly I must say…none—until now. :(

One of my favorite authors is Charles Dickens. My first Dickens’ encounter was on April 2011 when I read Oliver Twist. I know not whether it’s being a translation (to Bahasa Indonesia) or the story itself, that the book didn’t amazed me as I have expected. Eight months after that I read A Christmas Carol, and this time I think I began to admire Mr. Dickens for his writing style. Then 2012 came as the bicentennial of Dickens; and together with Melisa, I hosted a Dickens event for Indonesian Classics Reading Community (Baca Klasik) during February. I read A Tale of Two Cities for that event, and my liking of Mr. Dickens had been growing a lot since that, that I decided that Dickens has become one of my favorite classics authors. On that month also I ordered my copy of Charles Dickens: The Dickens Bicentenary 1812-2012.

That book then inspired me to dedicate a separate blog for Dickens’ life and works, containing facts from the book and other sources, my reviews of Dickens’ books, and my analysis of Dickens’ book characters. I created All About Dickens on April 2012, and invited Melisa to co-manage it. It’s still far from perfect and complete, as it serves as a diary in my journey with my dear Mr. Dickens.

After that I am officially a Dickensian. Last year I had savored Sketches by Boz, The Old Curiosity and Great Expectations, and became more in more in love with Mr. Dickens. :) His writing style is unique, as Matt D tried—but failed—to explain to the girl; it’s difficult to explain, other than I just love Dickens because he is Dickens; I love him because his writings are always enjoyable; it’s like reading tales when I’m a child, but with much more deeper meaning and reflection. Dickens can sometimes be witty and cynical, but at other times he can be emotionally touching.

And now I am really excited to read ALL of his novels for The Classics Club Project. But meanwhile, I am still in the process of collecting his books. So far, here are my collections of Dickens: 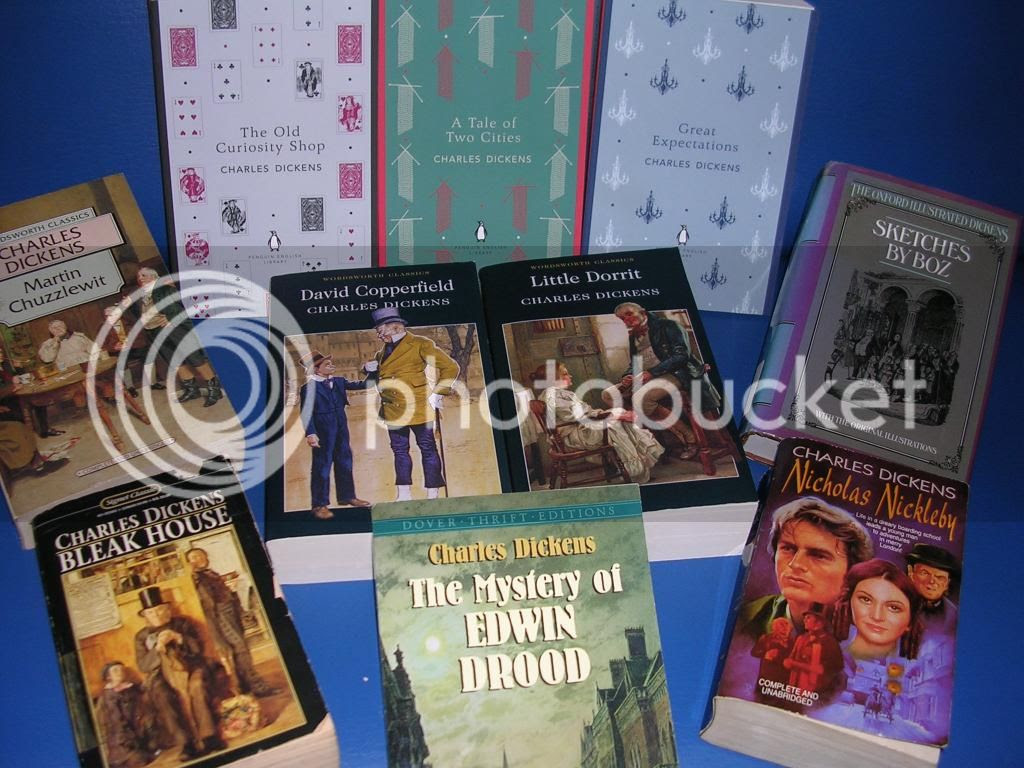 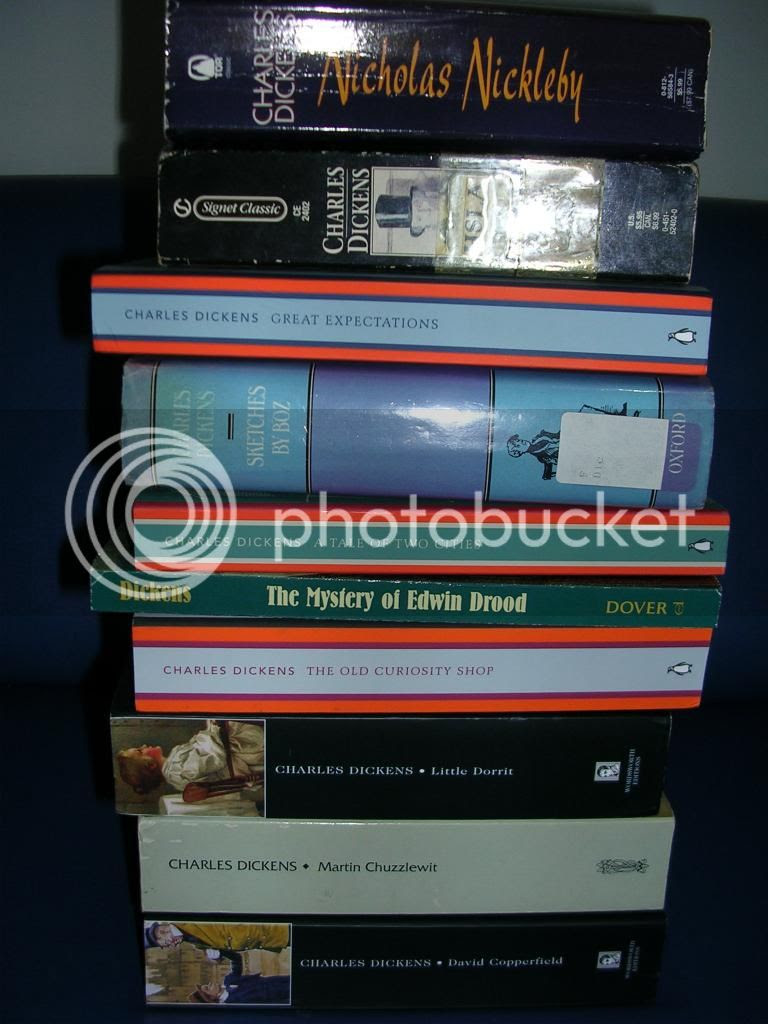 Not so impressive collection, but I keep working on it….

This post is published as my gift to Charles Dickens, who is celebrating his 201th birthday today, February 7th, 2013. Happy birthday, Mr. Dickens! For you—I wish you love my birthday present although I’m not as good as you in words crafting, and for me—I wish to get YOUR book as a birthday present, Mr. Dickens! We share the same birthmonth, you know… :)

Posted by Fanda Classiclit at 7:27 AM