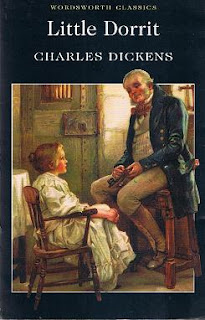 Until now, Little Dorrit might have been the most struggling Dickens I have ever read. If you think it’s the thickness, no, it’s not a problem at all. It’s not the story either—although I did have several complaints I would have made to Dickens on it if he’s still alive. The most annoying aspect in this book for me is Dickens’ lengthy depiction around Circumlocution Office and the economics system, which reminds us of the infamous Ponzi scheme. I know, it’s mainly on those two subjects that Dickens wanted to criticize through Little Dorrit, but again, his tedious description and emphasize on those subjects really bored me to death.

Little Dorrit followed the story of the Dorrits in their two extreme conditions. In the first stint, they lived poorly in Marshalsea debt prison—Dickens wrote it from his own childhood experience. Amy Dorrit born and grew in this prison, and after her mother died, she must endure not only poverty, but most of all—especially for Mr. Dorrit the father—family’s humility. In this prison also, Amy befriended a young man, Arthur Clennam, whose kindness and attentive manner has stolen her heart. In the second stint, the Dorrits unexpectedly inherited a large sum of money, which altered their faith. Leaving the prison behind, they hastily entered the high society of London.

Beyond that, Dickens also took us to the chronicles of the Clennams, the Merdles, the Meagleses, the Gowans, Rigaud and Cavalletto, and of course the mysterious Miss Wade. Their stories intertwined with each others, and through them Dickens presented us with the dark themes of social injustice, hypocrisy, greedy, hatred and revenge; and showed us how love and kindness were the only way to happiness.

My first impression after finishing this book was how Mrs. Clennam reminded me of Miss Havisham, both with their eternal passion of vengeance against love infidelity, and both rotted in their darkness houses and hearts. And then I was thinking how vividly Dickens wrote about their hatreds, did he experience the same feeling himself? In the same likeness, Little Dorrit also reminds me of Little Nell in The Old Curiosity Shop. Both were tender, shy, grew in poverty—which forced them to bear a bigger responsibility than what girls at their age must bear. Both were full of love, and must take care of the elders, and both were called ‘Little’. I think this was much influenced by Dickens’ fondness of young, delicate and innocent girls.

From the plot I felt that, here and there, Dickens seemed to force things to suit each other. At first the story was quite boring, again, with long description of the Circumlocution Office—the satiric way Dickens criticized the unbearable bureaucracy; that even they seemed to always be busy, they in fact did not do anything but circling one task all over the office without ever gone out from it. Fortunately nearly the end, we were entertained with the mysteries surrounded the Clennams, which boost the plot a bit faster, although I felt it too faster this time. There were still few things I still didn’t get after finishing it.

First of all, what did really happen with the money Little Dorrit should inherit? Was the money still existed when Mrs. Clennam revealed the secret? Was it kept in Mrs. Clennam’s possession all the time? Or whether Mrs. Clennam had spent the money? But on what? Considering on how wretched her old house was, the fact that she could not afford to buy back the codicil from Rigaud/Blandois, and her high pride, it’s very unlikely that she did as low as using the money herself. And speaking about the house, don’t you think its ruining or blazing was a bit exaggerating? And, who was the “the poor thing that kept here secretly”, whose ghost haunted the house and whose “sounds” Affery used to hear?

I keep also wondering why Little Dorrit insisted upon burning the codicil. I think Arthur had the right to know who his mother was. Mrs. Clennam has died anyway, so Little Dorrit won’t hurt anyone—but Arthur—if she just let Arthur read the document. And I don’t think Arthur would have been much hurt by the secret, he might have been angry to Mrs. Clennam for deceiving him, but still...I would never agree on one’s hiding a truth from someone he/she loves. Or perhaps Little Dorrit was afraid that the legacy will make her rich and unhappy? But the one she burned was only the codicil, not the original legacy, isn’t it? Oh well….whatever, I’m confused.

Apart from those confusions, Little Dorrit brings us the true portrait of social and economics of London in 19th century. From this book we came to know how the combination of careless investment and the corrupt government would do injustice to innocent people. Mr. Dorrit was imprisoned in Marshalsea after failing to pay his debt. He should have not stayed there for such a long time if the Circumlocution had done their works. Moreover, families of the prisoner suffered much from humility and banished from the society. Even after being released from it, the imprisonment itself left a dark trace in one’s life, as had happened to Mr. Dorrit.

In term of moral value, Little Dorrit taught us also that the real happiness does not come from wealth and status, but from love. Little Dorrit never looked at her poverty as a handicap; she always rich in love, and because of that, people loved her.

Three and a half stars for Little Dorrit, it’s not one of my favorites, but still….how can you don’t love Dickens’ witty and sweet story telling?