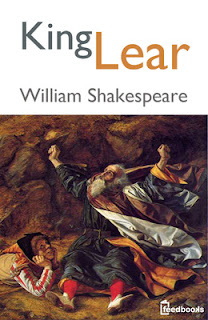 This is the third tragedy I read from Shakespeare; but unlike the previous two (Julius Caesar and Antony & Cleopatra), I did not find King Lear as I’ve expected. My biggest problem was the language. Being a non-English-native-speaker reader, I’m just beginning to get familiar to Shakespeare’s plays at Let’s Read Plays event. In two of three plays I’ve read since November 2012, I must sometimes consult the No Fear’s Shakespeare; only with The Merchant of Venice I read the whole play without any difficulties. With King Lear, unfortunately, I spent most of my readings with NFS. :(

King Lear is all about deception; it criticized how people like false, wordy and flowery declarations than true and honest confessions, and outer appearances rather than inner affections. The irony was that the elders—who are supposed to be wiser—were the worst victims of their children’s deception.

The play is about King Lear and Earl of Gloucester, and interestingly, both had had a similar faith. King Lear was going to divide his Kingdom to his three daughters, so he demanded them to declare their love level to him. The more they loved him, the bigger their share. Goneril and Regan both announced their exaggerated love declaration, while Cordelia—who deeply loved her father—could not find words to describe it. King Lear appreciated Goneril and Regan’s declarations, and granted them each along with their two husbands, half part of the Kingdom; while—being enraged with Cordelia who he thought didn’t love him—he banished the youngest princess.

On the other hand, Gloucester had two sons, a real one and a bastard one. The bastard Edmund—being hurt of how people talked about him as a bastard and envied his brother—accused his brother (Edgar) as a traitor. Gloucester—digested the case without further consideration—was enraged, that Edgar was forced to runaway in disguise. When the crimes were then revealed, both King Lear and Gloucester lost their insanity out of deep rage and regret—enraged to the traitors and regretted for bad treating the innocence. And just as typical tales, when King Lear and Gloucester were at their hardest times—both children they had rejected came to rescue them with a tender heart and forgiveness.

Besides that main plot, King Lear was also about loyalty vs infidelity. Kent, who had been serving the King, was banished when he defended Cordelia from his father’s banishment. However, instead of revenge, he return in disguise to serve King Lear as a lower attendant, while secretly was closely in contact with Cordelia about King Lear’s condition. Meanwhile Goneril and Regan had had affairs with the same man, Edmund. Goneril even asked Edmund to kill his husband, Duke of Albany, whom was a generous man, thus was different from his wife.

What confused me is the war between France and England. Was that really a war between two nations? Or was it merely Cordelia’s intention to set her father free, that King of France decided to send troops to England?

Actually I picked this play for its high ratings in Goodreads and positive reviews from others. I read it with high expectation, but left slightly disappointed, for the story was quite typical and ordinary. In fact I was wondering, is this play going to be enjoyable to be performed on stage? I feel that this play would be much better written as a novel than as play. I was also surprised at the vulgar comment about women here, which I found quite insulting.

“Down from the waist they are centaurs, though women all above. But to the girdle do the gods inherit; beneath is all the fiends'. There’s hell, there’s darkness, there’s the sulfurous pit— burning, scalding, stench, consumption!”

Three stars for King Lear. Not my favorite so far, and I’m now looking forward to Shakespeare’s history theme for February.

*I read the ebook version from FeedBooks dot com*