Cordelia is the youngest daughter of King Lear, and the kindest princess of the King’s three daughters. She is a tender-hearted young woman, honest and easily touched by injustice. Cordelia has no pretense in her. When King Lear asked his three daughters, how much they loved their father, Cordelia could not make up words to explain how deeply she loved her father, although she knew that her father would get angry to hear her plain expression. For Cordelia, it’s enough that she loved him deep in her heart; that her love could only be expressed through her care for him.

Even if her answer would cost her everything—her inheritance and her suitors (she would have nothing as her dowry)—Cordelia kept her principle, that true love could not be expressed plainly through words. I think she could have invented some lovely words just to save her status in the Kingdom, but she did not do that. I admire Cordelia’s strong hold of her principle and honesty. And to those qualities, she was rewarded by the King of France—one of her suitors—by marrying her despite of the lack of dowry.
Years after that, although having been unfairly banished by her father, Cordelia kept thinking of him, she never hated her father, there’s no vengeance in her heart. She persuaded her husband, the King of France to come to England to save her father from her two wicked sisters. 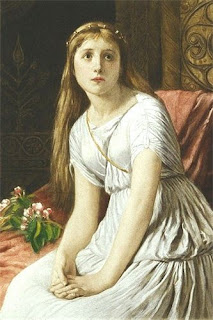 When Cordelia finally met King Lear, he was not the powerful King any longer, he has been a poor and weak old man who was banished from his own Kingdom. In his condition, Cordelia still loved him, because she has been loved him from the beginning not as a King, but as a father. And now, when seeing the poor condition of King Lear, Cordelia could finally express her deep love for him. That’s the purest kind of love a father could expect from his children. And from Cordelia, we can learn that love doesn’t need proof; love can only be felt with our hearts.