Although not the most influencing characters, Miss Wade is one of the most intriguing characters I found in Little Dorrit. She could not be included in the protagonists or antagonist group, as she was just an unhappy and indifferent young woman who added ‘colors’ to this book’s main story and theme.

From her first appearance on board the ship that brought Arthur Clennam to England, I have noticed something special in Miss Wade. She was described as ‘a handsome young Englishwoman, travelling, quite alone, who had a proud observant face, and had either withdrawn herself from the rest or been avoided by the rest.’ She was a stern woman, anti-social and liked to spend times in her solitary; she seemed to be having a severe hatred in herself, and always regarded the world with bitterness.

It was later on revealed that Miss Wade was an unfortunate human being. From her confession letter to Arthur Clennam, we began to understand why she appeared to be mysterious; and despite of her haughty manner, no one knew who she really was, and what social status or level she possessed. Miss Wade turned out to be born as an orphan. Since childhood she was treated differently; girls of her age with whom she lived with began to patronize her; and people conciliated her in insolent pity and superiority—just because she was an orphan.

Miss Wade has a deep love towards another girl whom she lived with; but she treated her just like others. Sometimes she seemed to be sweet to her, but other times she often deliberately hurt her too by making her jealous. In a little coincident, Miss Wade heard her friend told someone that Miss Wade was a child with an ‘unhappy temper’.

Further more when she was a young woman, she fell in love with a young man. They have been engaged and were certain to get married, when Miss Wade felt that the guy’s family wanted her to be submissive to the family. Once again Miss Wade felt she was being dominated by others, and this enraged her. The marriage was cancelled, and Miss Wade had a bitter hatred towards her lover. 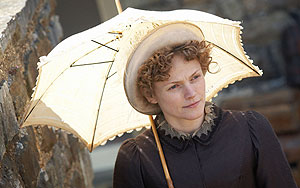 I think her strong will and determination came first from the lack of love she experienced in her childhood. Not having parental affection, she searched for it in her friends—and that’s why when she liked one of the girls, she loved her immensely. However she was disappointed by others’ superiority towards her, including her dear friend. It was the disappointment from her best friend which terribly hurt her. And unfortunately she lived among the society who highly praised social status at that time, that she was assumed and treated as a woman of lower class, despite of her educated and cultured manner.

From her story, I learned that before we judge others, we ought to find out their background first, it’s more often than not, one’s character or moral was cultivated from his/her childhood social culture and education.

Posted by Fanda Classiclit at 7:00 AM
Email ThisBlogThis!Share to TwitterShare to FacebookShare to Pinterest
Labels: blog hop, Little Dorrit