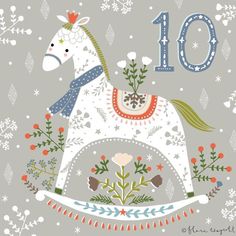 If you have been wondering whether this story is not rather quietly boring, with partly predictable plot every day, you're not alone. And Gaarder seemed to read our minds, because right when it's starting to get (too) convenient, a conflict is presented to us.

Joachim has been keeping his secret pieces of paper inside his "secret" locked box, and hiding the key. His mother has given him the box, and promised never to open it without his consent. But Joachim often blurts out bits of knowledge - which a boy his age is supposed to be innocent of - to his parents, that they begin to worry. Today Mama opens the secret box and reads all the stories, that Joachim is so enraged. It's not so much the revealing of the secret, as the fact that Mama has broken a solemn promise, and that he cannot trust her anymore. It's a reminder to parents, never to make promise they cannot keep, or break the one they have made. Joachim's mother should have confront him to open the secret box with him, instead of sneaking and stealing when he's not around.

But enough of the drama, let's reveal the content of the secret paper.

The new addition to the pilgrims is... another angel. It's a cherub really, called Impuriel. It's Elisabet who sees him first when they arrive at the St. Bartholomew Church in Paderborn, which was built in 11th century. 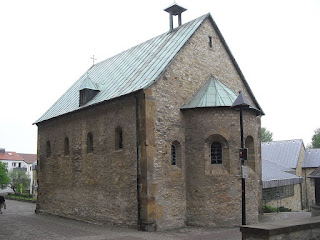 So there are ten of them - men, girl, angels, and sheep, and they continue on to the city of Cologne, on the bank of River Rhine. It's year 1272 angel-time, and the Cologne cathedral is still under construction at that time (the construction was completed in 1880). I've been to the finished cathedral myself about twenty years ago. It's a magnificent architecture, indeed!

And today's journey ends with another wise words from Ephiriel, that Elisabet (and I) hid in her heart:

"Every person on earth is a unique work of creation."

Posted by Fanda Classiclit at 7:52 AM
Email ThisBlogThis!Share to TwitterShare to FacebookShare to Pinterest
Labels: #AdventReading, The Christmas Mystery