It's Christmas! Or at least, in Scandinavian countries, Christmas festivities begins at 23rd December, the Little Christmas Eve. When Joachim opens the last door but one in his Advent calendar, a picture of a man walking beside an ass, and on the ass sat a woman in red clothes. Well, it's not hard to guess what title is written on the folded paper: Mary and Joseph.

So, finally, the twenty three pilgrims arrive at Betlehem, in the year 0. This is it! But before entering the city gate, Emperor Augustus opens the census book he's been carrying under his arm, and asks all the pilgrims - well, except for the sheep, that is - to write down their names and sign it. But Elisabet has an idea to include the seven sheep in the book too (but without names).

Now that their destination is nearly there, the innkeeper hurries to reach there before Mary and Joseph arrive. It happens right after they all watch down a road where a young man is walking beside an ass, with a woman in red clothes sits on it. Then all of them become more nervous and solemn, like one who is expecting something holy to happen. Each is sort of rehearsing something they have to say or do when Jesus is born (as we read in Bible) - something they seem to have known by heart.

Meanwhile, Joachim and his parents are also exciting to wait for John's visit - decorating the Christmas tree and baking Macaroon Cake (it might be what Norwegians call Kransekake - a towering stack of cookie rings, decorated with whimsical royal icing). 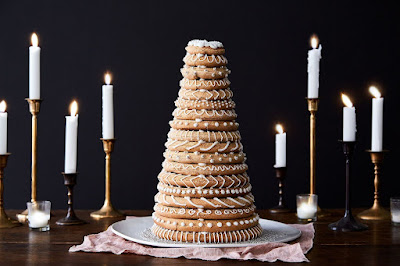 John comes as he promised, bringing a bouquet of roses, and finally tells a remarkable story of what had inspired him to make the Advent calendar. He's born in Damascus, and as a boy he found an old jar containing scrolls of very old manuscript. Some of these reported that a strange procession had been seen in the 1st century. Obsessed by many myths and legends of the similar incidents, John made a research, and found that these mysterious apparitions had been seen in many countries through centuries.

"Something that is mysterious for one second is often quenched like an empty oil lamp in the next. Yet, if only we turn our heads in another direction, a new light may be lighted there. For we cannot take in what is sacred in the same way as we pick up a stone from the ground and put it in our pockets." - what a remarkable thing to say.

Then John met a young woman in Rome called Tebasile. She's very secretive, and said that she's probably born in Norway, but grew up among shepherds and sheep farmers in Palestine. She said she was kidnapped when she's little, by an angel who needed her in Betlehem. After his researches on all the angel stories, of course John believed she said the truth.

But Tebasile said she will be leaving Rome, and after that John never meet her again. But not before he took her picture in front of St. Peter's Square (hence the photograph in book store window). John eventually came to Norway in search of this mysterious woman. There he learned about the missing young girl called Elisabet, and realized that Tebasile might be Elisabet read backwards. And that's when he began to make the Advent calendar, in hope that the story will be known by others beside him.

Last of all, John believes that the young woman's name is Elisabet Tebasile. There's a telephone subscriber in Rome of that name. And that's the end of his story. He won't reveal more, because it's not Christmas yet.

Quite a story, eh? I can't wait to reveal the last of this amazing story tomorrow!

Posted by Fanda Classiclit at 8:26 AM
Email ThisBlogThis!Share to TwitterShare to FacebookShare to Pinterest
Labels: #AdventReading, The Christmas Mystery