The third door on Joachim's Magic Advent Calendar reveals a vintage car. What? But's it's not a Christmassy stuff? So thinks Joachim, but after reading the hidden story that falls down his bed, he gets eventually what it's about.

Elisabet and Ephiriel, the angel, is still running after the lamb. A man is driving past them in a vintage car. Ephiriel then explains that they are actually travelling backward in time, to the past. Their destination is indeed Betlehem, but right on the day Christ was born, two thousand years ago!

"We are running to Betlehem through time, going downhill through history on a diagonal line. It's like running before the wind, or rushing down a moving staircase." 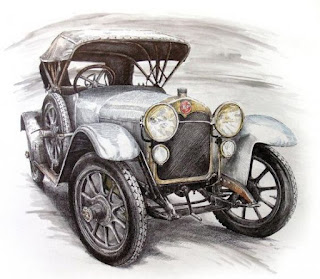 That really corresponds with what Elisabet has experienced previously: time moved backward on Day-1 and winter changed to summer on Day-2. They are in the year 1916, but later on when they reach Sweden, Ephiriel's watch (angel watch) shows the year as 1905. I can't wait when they enter the 19th century, because Gaarder managed to slip one or two pieces of history we can learn along the way. It gets more interesting every chapter, eh?

There's something inspiring in what the angel said about what they are going to do in Betlehem:
"....and we'll also welcome the baby Jesus into the world. He was called God's lamb, because He was just as kind and innocent as the little lamb's fleece is soft." It's what Advent should be, right? Time to retreat and reflect. The lambkin - the petit version of God - is guiding us to find kindness and love.

Then, a new character appears: a sheep. So now all the four of them are keep running through time and space toward the real Christmas.

Meanwhile, that driver's license of Joachim's Papa is still missing. I wonder where it will be found... in this universe or another?

Interesting quote:
"Joachim was old enough to know that you can't really ruin backwards in time, but at least you can do it in your thoughts." - and that is just what I am doing right now... in my thought I am journeying to Betlehem to witness the first Christmas.

Email ThisBlogThis!Share to TwitterShare to FacebookShare to Pinterest
Labels: #AdventReading, The Christmas Mystery 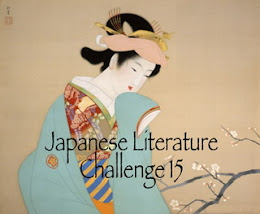