Three days before Christmas, the family find a picture of "a man standing in a river that reached up to his waist. The upper part of his body was clothed in rags." There's no doubt about who it might be implying - of course, it's John the Baptist. But is it the day we're gonna know whether John the flower seller is indeed John the Baptist?

The folded paper inside the door number 22 is titled: The Inn Keeper (I didn't see that coming, though - we never think about the inn keeper when we are talking about Christmas).

Anyway, today is the year 91, and Elisabet & co. is journeying through Samaria. They make a stop in River Jordan, then continuing to Jericho, which, according to Ephiriel, is possibly the oldest city in the world. Next they climb the Mount of Olives, from where they look down at Gethsemane.

Their next destination is, of course, the city of Jerusalem. it is now the year 71, and Elisabet is wondering how the city with ruined and destroyed buildings can be the Jewish capital. To which, Ephiriel is explaining about how the Romans had sacked and destroyed Jerusalem the year before, because its people had rebelled against Roman.

Impuriel is lamenting how humans kept singing about peace every Christmas, but never stop fighting each other. To which, Ephiriel is emphasizing that "...those who celebrate Christmas must remember that. Peace is the message of Christmas."

Entering the gate of Betlehem, they meet a man who is walking beside an ass, who introduces himself as The Inn Keeper, and that he is "one of them".

Meanwhile Joachim and his parents are wondering whether John the flower seller isn't in fact John the Baptist because when Joachim invited the flower seller to 'a cup of coffee', he said that he couldn't because he'll be going out in the wilderness - and John the Baptist also lived in the wilderness! However, a letter comes today for Joachim from the flower seller, who's inviting himself to 'a cup of coffee and a Christmas cookie' on Little Christmas Eve. I've just learned a Scandinavian tradition of Little Christmas Eve on the 23rd of December, when people usually begin to put and decorate their Christmas trees. 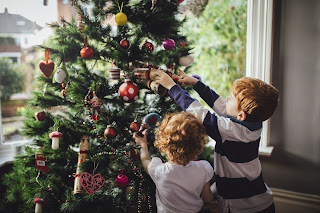 I can't wait to read about that little party tomorrow, but we must part here in the meantime.

Posted by Fanda Classiclit at 8:05 AM
Email ThisBlogThis!Share to TwitterShare to FacebookShare to Pinterest
Labels: #AdventReading, The Christmas Mystery