When Joachim opens the door number 18, they find a picture of a golden sceptre, which kings and emperors used to carry as a symbol of dignity. Another king will be introduced, but who?

The pilgrims are now going through Thrace towards Constantinopel when Ephiriel's angel watch shows the year to be 495 (today Thrace region is split among Bulgaria, Greece, and Turkey). They are about to cross the Bosporus strait, when they see a beautiful church; it was the basilica built by Emperor Constantine, but destroyed by fire in a few years. Later on a lovely Santa Sophia church was built on the same spot, which we know now as Hagia Sophia, after it was turned as a Mosque.

Right on the furthest point of Golden Horn quay, a handsome man in colorful clothes and a golden sceptre in his one hand and a thick book in another welcomes them. He introduces himself as the Emperor Augustus, who "order" them to accept him "without any unpleasant protest." The thick book he's carrying isn't a Bible, as Elisabet thought, but the sacred census (of course he'd need it in Betlehem!) There's no doubt that he's one of them, so off they all go on the Emperor's boat with large sails.

Elisabet wonders why Emperor Augustus becomes one of them when he's not a Christian, of which Ephiriel says: "God's kingdom is open to everyone, even people who travel without a ticket."

After landing on the other side of Bosporus, they arrive at the town of Chalcedon that is teeming with so many priests. It's because at that time (year 451) the biggest conference in the history of Christian Church was held in Chalcedon (Council of Chalcedon) to agree on Christian doctrine. 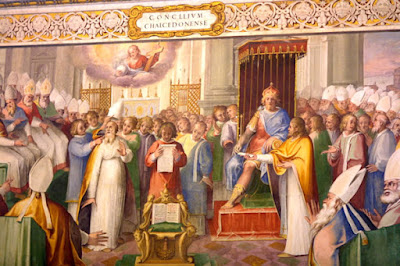 Upon that subject, the two Wise Men have a little quarrel with the angels. And it needs the angel Seraphiel to mediate the disputes, and Joshua's striking the crook, for them to start again the journey, this time down through Phyrgia towards the 4th century.

That's all for today, but we still have six chapters left till Christmas, so, Auf Wiedersehen!

Posted by Fanda Classiclit at 8:47 AM
Email ThisBlogThis!Share to TwitterShare to FacebookShare to Pinterest
Labels: #AdventReading, The Christmas Mystery