It is with mixed feelings that I type this #AdventReading post for the 24th and last time. I've been enjoying every moment of reading and sharing the stories with you. But everything must come to an end, and while Advent is over, we will get a more joyful time at Christmas tomorrow! I think it's with the same sentiment that Joachim and his parents open their last door of the magic Advent calendar today. John has specifically asked them to wait till Christmas bell ring at noon before opening the door. So, they are busy buying presents and preparing for Christmas dinner to while away the time.
Noon comes, and the last door is revealing a picture of a cave in a mountain, within which is surely where the Christ-child will be born. I guess I don't have to tell you what the last story is titled, because it's surely the most important character of every Christmas story: the Christ-child Himself!
I loved how Gaarder put an all out effort in his writing of this last chapter. You'll see a lot of quotation here, and I'll begin with this opening paragraph of the story:
"It's the middle of the world between Europe, Asia, and Africa. It's in the middle of history at the beginning of our era. Soon it will be the middle of the night as well. A silent crowd is stealing upwards between the houses in Betlehem..."
Seven sheep, four shepherds, five angels, three Wise Men, one Roman Emperor, one Governor of Syria, and a little girl are in a procession on the road in Betlehem. The stars are shinning brightly in the sky - "they are like sparks from a beacon far away" - but one star in particular is brighter that the others. In front of an inn, the innkeeper appears at the window, and to the pilgrims he points to a cave outside, in the wall of rock.
They stop in front of the cave, with a stable inside it. Suddenly the silence is broken by a cry of a child. And so, it is solemnly happening, the Christ-child is born in a stable in Betlehem. "He has come to our miserable world."
"This is a meeting of heaven and earth. For the child in the manger is also a spark from the great beacon behind those weak lanterns in the sky." 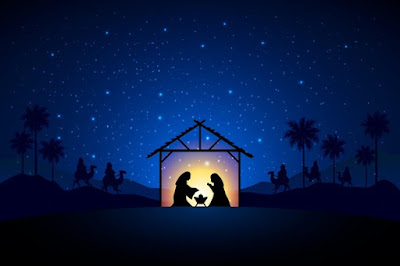 In a moment, all characters except Elisabet, are hurrying up to "perform their duties" like in the first Christmas, leaving Elisabet alone outside the cave. She asks then whether she may go in, and of course, she may, because "that is your role", says the Emperor.
"Elisabet looked up at the starry sky. She had to tilt her head far back to see the big star which was shining so brightly. Again she heard the cry of a child from inside the cave. So she went into the stable."
.....and there's where this magnificent story ends...
But what about the Elisabet/Tebasile mysteries? Calm down... Gaarder really spoilt us with a... surprise!
John the flower seller is back for coffee, and now he's about to reveal why and how he made the Advent calendar. The large picture on the calendar, at least, was intended to be giving the person owns it something new to discover, at least everyday during Advent, because...
"All God's creation was like that. The more we understand, the more we see things around us, and the more we see in things around us, the more we understand."
When asked whether he's found news about Elisabet, John is giving them all a surprise, because at that moment the door bell rings, and lo and behold.... a woman aged around 50 is standing there, wearing a red coat and a silver cross with red stone - Elisabet Hansen herself! - or to be precise: Elisabet Tebasile Hansen. She's just arrived in Norway, and has reunited with her old mother the day before. And at last, this is her story....
Elisabet grew up in Palestine, in a little village near Betlehem with poor people. Their lands was taken away, and since then Elisabet had lived in some refugee camps. When she's a child, Elisabet had been kidnapped by some kind people whose mission is to help people in need in Betlehem, where she lived among shepherds. When she told John that she's kidnapped by "angels", she meant the kind people. That's all she remembers about her childhood. She did came to Rome and met John, but then disappeared because she's suspicious that John intended to harm her people (the refugees).
But John has his own theory. And he wrote it down as the stories we've been reading through Advent. Both Elisabet and John insist that each version is the truth. Who's really telling the truth? No one can say. Joachim and Mama believes in John's version, but Papa thinks Elisabet's version is the truth. John's reaction is worth reflected:
"We mustn't start quareling even though we believe slightly different things. That's the message of Christmas too."
Mama's insight is no less worthy for deeper reflection too:
"We open the last door in an old Advent calendar and hear about Elisabet who goes into a stable in Betlehem to welcome the Christ-child into the world. Immediately afterwards the same Elisabet rings the doorbell in our own house. So it almost seems as if this house is the same as the stable where Jesus was born." - beautiful isn't it?
Now for the surprise.
Later that night before going to bed, Joachim is starring out of the window, into the Christmas night. Suddenly he sees some figures running down the road for only a second or two. He thinks it's Elisabet, Ephiriel and the other pilgrims who have been going to Betlehem with Elisabet... and who are now... escorting her back!
Really interesting, right?
And so, it's the end of a long journey through Advent. I admit, I've never had this kind of Advent before, and this reading and posting have been fun, insightful, and worthy activities to wait for Christmas. Thanks to all of you who've been reading along with me!
Previous posts:
- Day-1          - Day-13
- Day-2          - Day-14
- Day-3          - Day-15
- Day 4          - Day-16
- Day-5          - Day-17
- Day-6          - Day-18
- Day-7          - Day-19
- Day-8          - Day-20
- Day-9          - Day-21
- Day-10        - Day-22
- Day-11        - Day-23
- Day-12

Posted by Fanda Classiclit at 8:39 AM
Email ThisBlogThis!Share to TwitterShare to FacebookShare to Pinterest
Labels: #AdventReading, The Christmas Mystery