“If the great gods be just, they shall assist
The deeds of justest men.” ~Pompey

The problem was, which one of them were the ‘justest’?

Pompey was discussing with Menecrates and Menas his chance in the coming battle against the Triumvirs. Pompey tended to underestimate the Triumvirs at first. He—just as Caesar—doubted that Antony would really leave Egypt for the war. Moreover, they hoped to use the internal dispute among the Triumvirs as one of their weapons.

* Lepidus was between the dispute of Caesar and Antony. Here we met again the harsh comments of Enobarbus:
“Or, if you borrow one another’s love for the instant, you may, when you hear no more words of Pompey, return it again. You shall have time to wrangle in when you have nothing else to do.”
Don’t you just want to slap him in the face? :|

* In this scene Mark Antony obviously overshadowed Caesar in their quarrel. Instead of Caesar demanding Antony’s conduct in Egypt, it seemed more like Antony pointed how absurd it was to relate his brother and Fulvia’s war to him (Antony), and how more unreasonable it was to fuss over a woman’s offense. Caesar here looked like a crying child, while Antony a noble gentleman. Bravo Antony!
“Truth is that Fulvia,
To have me out of Egypt, made wars here,
For which myself, the ignorant motive, do
So far ask pardon as befits mine honor
To stoop in such a case.”

And on top of their dispute, Agrippa came with a perfect idea, which is to marry Mark Antony with Octavia—Caesar’s beloved sister; which Antony agreed it. A brilliant idea from Agrippa it seemed at the moment perhaps, but we know that it was useless, because one ship cannot have two captains. Moreover, it’s a great risk—considering how Caesar loved Octavia dearly, and how Antony had passionately fallen in love with Cleopatra, that if someday he left Octavia for Cleopatra, his relationship with Caesar would be in a much greater danger than at that present time.

* Enobarbus’ description of Cleopatra and her luxurious barge at the moment of her first meeting with Antony was amazing, it portrayed Egyptian exoticness quite perfectly. 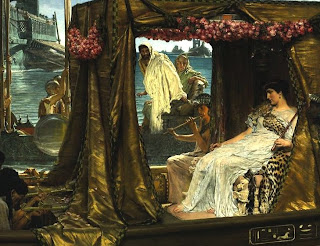 * I don’t quite agree with Enobarbus here:
“And for his ordinary pays his heart, for what his eyes eat only.” I still believe Antony was really falling in love with Cleopatra, and not the other way round.

* Right after his marriage with Octavia, Antony planned to return to Egypt. Partly because I think his heart remained there, and partly after he considered what the soothsayer told him about how he would have been destroyed whenever he was near Caesar.

* I believe that Parthian war would become Antony’s first expansion campaign to the East, which in the future will be the cause of his separation with Octavius (if I remember it quite well).

* Lepidus would take a different path to Messina. And though he was the weakest among the triumvirs, Lepidus was the one who depart earliest. I often pity him, crushed between Octavius and Antony, a good statesman with less ambition. Just like Brutus, you’re not supposed to plunge into politics at all, o poor Lepidus!

* I don’t know why Shakespeare made Cleopatra looked like a teenager who was madly in love. Even if her love to Antony was real —which I doubt—Cleopatra looked really ridiculous with how she did not know what she wanted to do (from listening to music, playing billiard, to fishing) and all other madness (seriously…playing billiard? Cleopatra??). Could you imagine the mighty queen of Egypt actually did that? What she did to the messenger from Rome who brought news about Antony’s marriage did show her ruthlessness, but the way she carried it on was rather comical than wicked.

* This was where bargains were made, if it was accepted, war could be avoided. And I was surprised that Pompey accepted the treaty very quickly—even Menas criticized it—and then followed by four feast with each leader hosted his own feast. Was it only a strategy? Let’s see what happen next…

Scene VII – On Board Pompey’s Galley, Off Misenium

On the feast Lepidus was drunk, and the servants commented on him of being the weakest in the Triumvirs, and prophesied Lepidus’ future’s fall in the hand of the two others. And they were so true by saying: “To be call’d into a huge sphere, and not to be seen to move in’t, are the holes where eyes should be, which pitifully disaster the cheeks”

* I don’t like how Caesar and Antony talked about Lepidus:
Caesar : (aside to Antony) Will this description satisfy him?
Antony: (aside to Caesar) With the health that Pompey gives him, else he is a very epicure.
But then, I believe they have taken advantage from poor Lepidus from the beginning. Both Caesar and Antony were ambitious guys who—despite of agreeing on building a Triumvirate—always wanted to be the sole leader of Rome.

* Menas suggested Pompey to kill the Triumvirs while they were feasting on their boat, but Pompey declined the idea as dishonorable—although he added if Menas have done it without Pompey knowing it, he would have agreed to it. Can you call it honorable?... :|

Posted by Fanda Classiclit at 9:19 AM