Scene I – Rome. Before the Capitol; the Senate sitting above. A crowd of people, among them Artemidorus and the Soothsayer

Notes:
* This scene is interesting, there is this crowd at the Senate, and I can imagine all the busy movements, who’s approaching who, and all the whispers, assumptions, alerts and suspicions, bitter laughs and cold looks. Well, a Senate should look like this: dynamic!

* The plot of the murder would be like this:
- Casca : to raise hand (as a sign?); to be the first to stab Caesar
- Desius: to convince Caesar to go to Senate House; then second Metellus’ petition
- Trebonius: to distract Mark Antony from Caesar?
- Metellus Cimber: to submit first petition to Caesar: to repeal for his brother: Publius Cimber’s banishment (Brutus then Cassius plead too).

* And the execution went on like this:
- Metellus Cimber knelt to plea for Publius Cimber’s release; which Caesar refused instantly.
- Brutus came to his knees to, asking Caesar to grant it.
- Then one by one: Cassius, Cinna and Decius knelt down too in front of Caesar. At this point Caesar was irritated at those ‘begging on the knees’ show.
- Casca then cried… “Speak, hands, for me!”, and stabbed Caesar.
- The other followed him, Brutus the last. 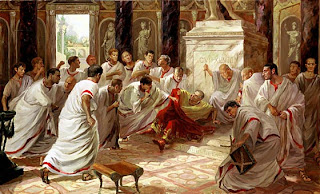 * While I have never liked Julius Caesar—I mean I have read about him from historical fictions and wiki—and the fact that he had changed the democratic Republic of Rome to be a tyrannical government, I still felt pity on him on his murder scene. Maybe the murder was not shocking to him—as every ruler knows that there are always people or factions who want to kill him—however being betrayed by a man he mostly trusts or loves, is really hurt. So, I’m really touched by Caesar’s last words before he died… “Et tu, Bruté?” Being a leader often means that you are going to be alone at the top. There are people who love you, but mostly they just expect something from you, and there are more people who envied and hated you.

* I was surprised that Brutus joined in the action too, a noble man like him! If it has been Cicero, I believe he would have made some excuses or busy himself with something to avoid the murder, I don’t think he would dirty his hand for stabbing anyone. Oh, but I forget, he could ‘stab’ his enemies by his words anyway, why bother bringing dagger beneath his cloak? But for a man like Brutus, he might thought that stabbing Caesar by himself—despite the fact that the other four’s stabs must have killed him anyway—meant that he had been loyal to Rome and to other conspirators. Maybe….but I still think you should not done that, Bruté!

Notes:
* Mark Antony’s oration was one of this Act’s most important aspects. If I can make it only one word, it was CLEVER! Antony had cleverly convinced Brutus that even he had loved Caesar, he did not grieved his death; which Brutus took it just like that, despite of Cassius’ warning, and let him do his funeral oration. This was a huge mistake by Brutus! Maybe you’re a noble man, but you’re definitely not politician!

* About Antony’s oration itself, I admire how he opened it in the sense of praising the ‘noble’ Brutus. He never attacked Brutus, or cursing the conspirator’s brutal action. On the contrary he kept on expressing his admiration towards those ‘noble men’, while on the other hand emphasizing what great services Caesar had done for Rome. He did not stirred up the citizens to take avenge, but let people reasoned it by themselves. I imagined, if I were Brutus, I will get confused at first, ‘What is this man up to?’

“Come I to speak in Caesar’s funeral.
He was my friend, faithful and just to me.
But Brutus says he was ambitious,
And Brutus is an honorable man.”

“You all did see that on the Lupercal
I thrice presented him a kingly crown,
Which he did thrice refuse. Was this ambition?
Yet Brutus says he was ambitious,
And, sure, he is an honorable man.”

Then when he finally realized what Antony’s up to, it’s already too late….
“I fear I wrong the honorable men
Whose daggers have stabbed Caesar. I do fear it.”

“O, what a fall was there, my countrymen!
Then I, and you, and all of us fell down,
Whilst bloody treason flourished over us.”

It’s enough to convince the plebeians to take avenge for Caesar.

Antony’s prediction came true, the city burned with rage, and they who had been known as friends of conspirator were being killed. An innocent poet named Cinna was killed by the citizens for being mistakenly identified as Cinna the conspirator.

Notes:
* Again…another civil war, although I don’t know how far this will end up. I am just thinking (this is a bit out of the play) what would have been the best form for Rome—republic or monarchy? I mean, with the past to consider. Well, both Republic and Monarchy often fell into civil wars, but from my point of view, Republic was slightly better. At least someone must have had quality of a leader to gain followers and supporters, thus had a better chance to be elected; while in monarchy, the choices are limited only from the family lines.

Posted by Fanda Classiclit at 1:11 PM