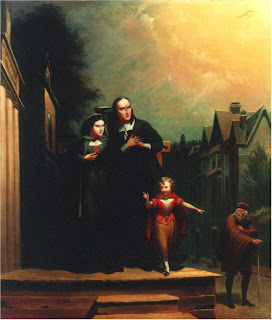 When I was working out with The Scarlet Letter for my The Well Educated Mind self-project, I came to the thoughts of “Sin” and “Repentance”. Hester and Dimmesdale were both sinned, they worked together to their falls, however each proceeded with different ways. And suddenly I was curious to watch both their progresses, and how their conducts brought them to their ends. So I made this diagram, to conclude in the end, who’d succeed and who’d failed. This is interesting…. 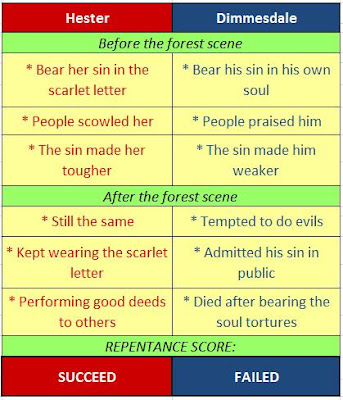 I think we can learn from this diagram too—I don’t say that we must wear a kind of token to show off our sin in public, but I am thinking about how we’d best represent ourselves before God. Only with humbleness and openness we could receive His mercy and forgiveness, and with that we could revive from our sin, and instead of fading from life like Arthur Dimmesdale, we could be more useful for others, or for the society, just like Hester.

Why had Hester Pryne succeeded? I incline to think that she had been purged from her burden of sin by wearing the scarlet letter, and at the same time accepted in her calmness of being secluded, humiliated and scowled by the Puritans, while she kept doing kindness to them. All these lifted her burden, and she could renew her life after her freedom, she had her own choices.

Why had Arthur Dimmesdale failed? Because he was too hypocrite and too cowardice to admit that he was a sinner. He had accepted what he deserved for all his services to God (people appraisal). I can only think that Dimmesdale did his sermons and anything else just to get God’s (and people’s) rewards. In the end his sin only made his divine efforts distinguished.

So, which way would you choose for your own, Hester’s way, or Dimmesdale’s way? :)

Posted by Fanda Classiclit at 10:03 AM

Email ThisBlogThis!Share to TwitterShare to FacebookShare to Pinterest
Labels: The Scarlet Letter