If It Be Love Indeed, Tell Me How Much: Antony and Cleopatra - Act I 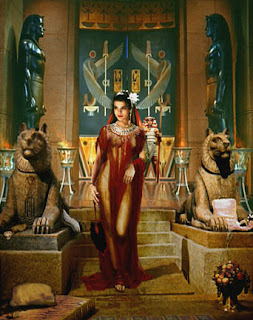 Demetrius and Philo—two of Mark Antony’s friends—opened this play by remarking how Mark Antony has completely changed from a great general of Rome to be the love slave of Cleopatra, queen of Egypt. Mark Antony, who was poised by his love to Cleopatra, even dared to reject a messenger from Rome—whom Cleopatra took as a beckoning from either Fulvia (Antony’s wife) or Octavius the Caesar. All the same, Antony rejected to hear the message, which astonished Demetrius and Philo who thought that as a sign of Antony’s disrespect towards Caesar.

* Well, after listening to Mark Antony’s great speech at Julius Caesar’s funeral, now I must admit that Antony has never lost his skill when he was falling in love. Look at his smart replies when Cleopatra asked him to measure his love.
Cleopatra: “If it be love indeed, tell me how much.”
Antony:     “There’s beggary in the love that can be reckoned.”
Cleopatra: “I’ll set a bourn how far to be beloved.”
Antony:     “Then must thou needs find out new heaven, new earth.”

He’s still that clever man with the skill of pouring the right words in the right situation, eh?

* I think it’s Mark Antony who was crazy in love with Cleopatra, while Cleopatra was just using Antony.
“Why did he marry Fulvia, and not love her?
I’ll seem the fool I am not. Antony
Will be himself.”

This was a funny dialog between Cleopatra’s servants, who were listening to prophecies from a soothsayer. The soothsayer prophesied that a husband would be cheated by his wife, but when Charmian asked the soothsayer to tell about her fortune, came these witty dialog:

Antony finally listened to the messengers (three of them) anyway, who sent bad messages about a Labienus had conquered Asia, and the worst one was the news of Fulvia’s death. Antony realized that he had wasting his time in his lust towards Cleopatra while everything has gone worse. He then decided to leave for Rome. Moreover, Pompey’s son Sextus Pompeius had received more attention from citizens, and Antony knew that they must handle it before Sextus gain more power.

* Funnier pieces in this scene:
“Good now, some excellent fortune!
Let me be married to three kings in a forenoon and widow them all.
Let me have a child at fifty, to whom Herod of Jewry may do homage.”

A witty-smart piece from the Bard! :) But was ‘Herod of Jewry’ here represented the event of King Herod ordering slaughter of infants in Betlehem to kill the prophesied child who would become the King of Israel? But then, Jesus Christ was born on Tiberius’ reign who was Octavius’ successor; and thus Charmian would not have known about it at that time, right? Oh, whatever it was, that was still funny :)

* Another witty piece of dialog was the one between Enobarbus and Antony. Enobarbus suggested that Antony should be thankful to the god that Fulvia was dead so that he could replace her with Cleopatra. The way Enobarbus using metaphor of cloth was really funny, not to mention what he said about shedding tears!

“Your old smock brings forth a new petticoat;
and indeed the tears live in an onion that should water this sorrow.” 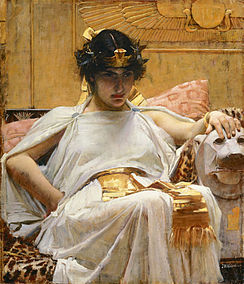 * This is an interesting ‘battle’ between Antony and Cleopatra, and the winner was… Cleopatra! :) Thanks to Charmian’s advice, Cleopatra played her part very well; she let Antony thought that she did not want to dissuade his leaving, but she was tortured by the thought that Antony would soon forget her. Antony grew impatient at first, but he soon melted on Cleopatra’s ‘heroic sacrifice’, that he ended this act beautifully:

“Our separation so abides and flies
That thou, residing here, goes yet with me,
And I, hence fleeting, here remain with thee.”

The stage performance of Scene I and II, Timothy Dalton played as Mark Antony

Octavius was furious at Antony’s lustful business at Egypt and his indifference of his tasks in Rome, while Lepidus was more mildly forgave Antony. In the meantime people started to gather around Sextus Pompeius.

Octavius described people’s behavior so well:
“That he which is was wished until he were,
And the ebb’d man, ne’er lov’d till ne’er worth love,
Comes dear’d by being lack’d. This common body,
Like to a vagabond flag upon the stream,
Goes to and back, lackeying the varying tide
To rot itself with motion.”

But then, it represented all politicians and senators in Rome, right? Won’t you act the same had you weren’t the present Caesar, Octavius?

Two famous pirates, Menecrates and Menas, who were approaching Rome just added the Triumvirs’ headaches; they were preparing for a war.

I just knew from this play that Cleopatra was also Pompey’s son's lover! (besides Julius Caesar and Mark Antony). Was that really historical?

When Cleopatra said:
“By Isis, I will give thee bloody teeth
If thou with Caesar paragon again
My man of men.”

I just wonder whom she regarded as “my man of men”. Of course, it supposed to be Antony, for this play was about him and Cleopatra, but I’m just curious, which one of her two lovers whom she really loved the most. Or both of them were merely her political tools?

Posted by Fanda Classiclit at 1:33 PM