Scene I - A House In Rome

Mark Antony, Octavius and Lepidus formed a triumvirate, however Antony thought Lepidus did not deserve to be shared third of the kingdom. He saw Lepidus merely as an ‘errand boy’. “Do not talk of him, but as a property.”

Notes:
* Just a stupid thought, but after Julius Caesar’s case, why they did built another triumvirate? But again, I think the situation was such a chaos that everyone must believe that Rome should have its leader soonest possible, and whatever form it was would be better than a ‘casual vacancy’.

Brutus felt that Cassius’ friendship has changed after Lucilius reported to him the unfriendly manner Cassius had hosted him. Both friends started to argue, but Brutus invited Cassius to discuss it in the tent. 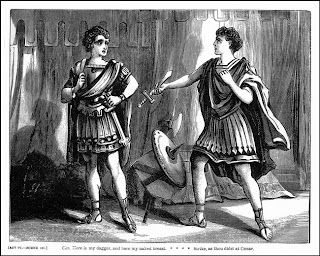 A conflict flared between Brutus and Cassius mainly because misunderstanding and different way of thinking. Brutus punished a Lucius Pella for bribery while Cassius defended him. On the other hand, Brutus had asked for gold to pay his legions but Cassius never answered. The quarrel reached its climax and they almost fought each other when Cassius put out his dagger; but his action cooled down Brutus’ anger, and he admitted that he was not in a good mood.

Apparently Portia had died when Brutus fled from Rome; she swallowed fire out of despair of Brutus runaway and of Octavius-Mark Antony’s gain of power. Messala came then with a news that the Triumvirate has killed nearly hundreds senators—including Cicero :(  Octavius and Mark Antony had challenged Brutus on a battle in Philippi, so Cassius and Brutus decided to bring their armies the next day.

At night Brutus saw an apparition by a ghost (seemed to be Caesar’s) while his men were fall asleep. The ghost promised to meet Brutus at Philippi.

Notes:
* What an absurd loss of Portia! I was surprised that she did that, I have thought her as a strong and determined woman, and I would imagine her to be strong and patience, trusting that her beloved Brutus would be safe and return in no time—just like Penelope in her long waiting for Odisseus. And her suicide was an uncommon one, swallowing fire? But I read in wiki that Portia was a little insane, so…that makes sense.

* The appearance of the poet at Brutus’ tent after Brutus–Cassius’ quarrel was quite out of place and laughable. What did he do there? A poet in a war? And he just burst into the tenth, that people inside would have thought he came with urgent news that the enemies was approaching or something. LOL, what a witty distraction from Shakespeare…
“For shame, you generals! What do you mean?
Love, and be friends as two such men should be.
For I have seen more years, I’m sure, than ye.”

He came in quite late too, because at that time Brutus and Cassius had already calmed down; do you think it’s because the poet need some time to build his rhyme? And errr….not a very good one too... :)

* Another witty scene was when the ghost ‘made appointment’ with Brutus to see him at Philippi. Instead of creepy, I actually smiled widely at this… :)

Posted by Fanda Classiclit at 9:18 AM