Gone With The Wind – Final Review 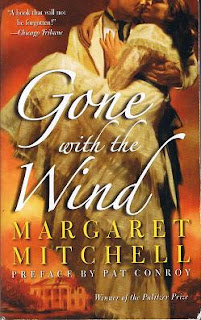 Gone With The Wind was one of around ten or eleven books that have always been intimidating me. First, because romance has never been my favorite genre—I hear you’re yelling at me that GWTW is not JUST a romance novel, I know, I know! But still, besides the historical contents, I still think that GWTW is best included in genre romance. Second, because of its thickness—1448 pages! GWTW was perhaps one of the longest books I’ve have read. So, you see, GWTW would not be my best choice for classics reading, however, GWTW has been reviewed as a great literature by many people, that I think I must have a go. And that’s how I decided to host this Gone With The Wind Read Along—which quite surprisingly—got a lot of interested participants; thanks a lot to your guys! :)

From my update posts from Part 1, Part 2, Part 3 and Part 4, you can see my progress with GWTW, and you would know that despite of my efforts, I could not get into the story as I have expected. One thing that was entertaining me through the story is the historical aspect, the American Civil War and the slavery. It’s quite interesting to see how the Southerners treated their slaves, and how the slaves reacted; it’s even more interesting to follow Mitchell’s perspective towards the slavery. Although sometimes I got difficulty in following how the blacks speak, it could describe the atmosphere better.

But apart from those aspects, the story itself had failed to impress me. The main culprit was Scarlett, from whose point of view Mitchell had written the whole story. From many discussions on Twitter with other participants and from participants’ Update Posts, Scarlett was not a favorite character, yet I have been advised to not concentrating at Scarlett personalities only, but more on the upheaval of the Southerners because of the war. Well, the problem is, Scarlett was a dominant character here, as if Scarlett was the person who told me about main events in this book. Tell me, when you did not like—or should I say ‘hate’?—a person, could you appreciate anything that she/he said? I can’t….

Until now I still don’t understand why Mitchell created such an annoying character to tell her story. I could not trace any single positive aspect about Scarlett, other than her determination. But to what aim was her determination? At first, when she was much younger, and the life was good before the Civil War, Scarlett’s main focus was to attract as much as beau to love and marry her; and I can see even then, that Scarlett’s determination was so strong. After her world had been up side down by the war, what was her main aim? Money! She could put aside anything else—people who loved her, her conscience, even her logic—to be able to get the only thing that filled her narrow-minded brain: money. I understand that in crisis we need money to survive, and Scarlett has a good reason for that too, she need money to save Tara, her family’s land. But again, what a land would mean if she must lost everything else?

So no, I still can’t understand why Mitchell ruined the great story by letting Scarlett to tell it. And because of that, I personally don’t think that GWTW deserved to be called classics. It is an epic, a great one, I agree, but not classics (sorry if you think differently). And Scarlett’s and Rhett’s vulgar point of views only made it worse, that sometimes I felt like I’m reading a piece of chicklit or watching a soap opera, instead of a classic literature.

I must admit that I failed to read the whole piece, when I came to Part 5 I just could not get on. I just browsed the ending, and searched in Sparknotes about it, and found that I did not miss many things, and really was not interested in knowing the ending. Three stars for Gone With The Wind, for though I failed it, I think Mitchell deserved an appreciation for telling this epic. And although this is not a special review, I’d like to present this honest opinion to celebrate Margaret Mitchell’s birthday today, November 8th. Happy birthday Mrs. Mitchell!

Posted by Fanda Classiclit at 10:00 AM