Marcus Junius Brutus was one of the senators who conspired against the dictator of Rome, Julius Caesar. Brutus was a noble and honest man. Unlike others in the conspirator group, Brutus’ main aim in the conspiracy was to bring freedom to Rome, instead of his own greediness. This was admitted by Caesar’s friend, Mark Antony:

“This was the noblest Roman of them all.
All the conspirators, save only he,
Did that they did in envy of great Caesar;
He only, in a general honest thought
And common good to all, made one of them.”

When he was first approached by Cassius to become the conspirators’ chief, he did not agree at once, but he took time to reflect it. He did not seek fame, and he was far from ambitious.
“Brutus had rather be a villager,
Than to repute himself a son of Rome” 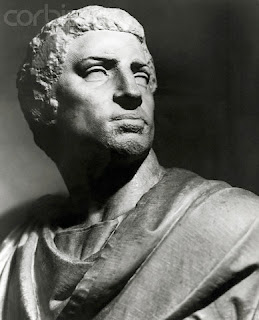 If he finally agreed to lead the conspiracy, it was for Romans sake, because he felt Caesar had become more ambitious, and this would endanger Rome. Brutus was one of the straight men in Rome—Cicero was the other I have in mind—who really cared about his country’s moral corruption. I don’t think a noble man like Brutus would think about killing others, but he did stabbed Caesar because he thought it ought to be done for Rome. Moreover, Brutus condemned a senator called Lucius Pella for bribery, although Cassius—his friend—defended him. Brutus was not reluctant either to warn Cassius of his greediness.

Brutus was an affectionate husband, and unlike most of Romans at that time, he respected his wife, Portia. He treated her as an equal companion. He shared many things with his wife and had not any objection when Portia suggested things to him; he valued her opinions. Brutus valued a true friendship too. He was sad and disappointed when he was told that Cassius did not welcome Brutus’ man with warm affection as usual.

“When love begins to sicken and decay
It useth an envorced ceremony.
There are no tricks in plain and simple faith;
But hollow men, like horse hot at hand,
Make gallant show and promise of their mettle;
But when they should endure the bloody spur,
They fall their crests and like deceitful jades
Sink in the trial.”

If Brutus had a weakness, it was that he was too straight and naïve that he did not realized Cassius’ taking advantage of him. When Brutus was weighing whether he should kill Caesar or not, Cassius’ false letters came, and I believe those letters helped Brutus to make decision. Brutus was born as a noble man, but he should have never involved in politics!
Posted by Fanda Classiclit at 7:00 AM