Scene I – The Plains of Philippi

Notes:
* Here Antony and Octavius had different opinion on battle strategy, and I think this was an early sign of the disharmony in their power-sharing in the future. Anyway, Antony made the decision by himself—as if Octavius was his assistant who should obey him—instead of asking his opinion.
Antony:   “Octavius, lead your battle softly on,
Upon the left hand of the even field.”
Octavius: “Upon the right hand I, keep thou the left.”
Antony:   “Why do you cross me in this exigent?”
Octavius: “I do not cross you, but I will do so.”

* Here I saw another proof of Mark Antony’s skill on words…
Brutus:    “Words before blows. Is it so, countrymen?”
Octavius: “Not that we love words better, as you do.”
Brutus:    “Good words are better than bad strokes, Octavius.”
Antony:   “In your bad strokes, Brutus, you give good words.
Witness the hole you made in Caesar’s heart,
Crying “Long live! Hail, Caesar!”
Oh, I always love words game; and to analyze what they’re really up to is fun. I think Brutus actually preferred to settle matters without fighting, then Octavius sneered at him because Brutus preferred to talk rather than to have real battle. However Antony reminded Brutus of his betrayal, which was unforgiveable, thus the conspirators must be put off once and for all. 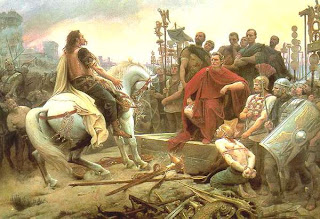 Scene II – The field of battle

Brutus’ armies met Octavius’ and at that time Octavius seemed to get weaker, so he and Messala went to the other side of the battle field to help Cassius.

Notes:
* I think I’d prefer to imagine a real battle field (with sounds of battle from afar) than imagining the play performed on stage. :)

Scene III – Another part of the field


Notes:
* So Octavius was right after all, Brutus was indeed not as good in battle as in words…

* Cassius’ death was a bit absurd, he trusted Pindarus’ observation just like that. But I think actually Cassius was haunted by his guilt, because it’s not for Rome he conspired against Caesar, it was his own personal envy. So at certain point he quite expected the loss, so the shouts of joy and Pindarus’ observation just confirmed his conscience, it’s time to end it.

Scene IV – Another part of the field

The battle continued, young Cato was the first victim, killed by enemies’ soldier; while Lucillius bravely claimed himself as Brutus and even bribed the soldiers to kill him at once, but they did not dare to do that. Mark Antony arrived and saw that it was not Brutus; he kept Lucillius as prisoner.

Notes:
* Two thumbs up for Lucillius who bravely praised Brutus:
“Brutus is safe enough.
I dare assure thee that no enemy
Shall ever take alive the noble Brutus.
The gods defend him from so great a shame!
When you do find him, or alive or dead,
He will be found like Brutus, like himself.”

* So, in the end this play was not only about killing the tyranny, but also about guilty. Look how the conspirators met their end, it was perhaps nobleness (like in Brutus’ case), but I tend to think it was actually guilty. They all knew what the price of murdering a man so cruelly (23 stabs!). 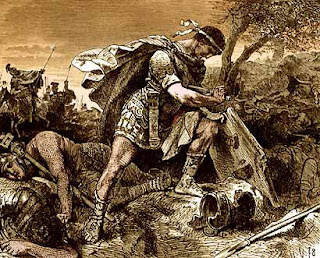 Scene V – Another part of the field

Brutus was trying to make his soldiers willing to kill him. He finally asked Strato to do that, considering that they were at the edge of losing the battle. Everyone agreed that Brutus died in honor, and the play ended with the win of Octavius and Mark Antony.