Notes:
* I begin to like the noble Brutus, especially on this….
“But do not stain
The even virtue of our enterprise,
Nor th' insuppressive mettle of our spirits,
To think that or our cause or our performance
Did need an oath, when every drop of blood
That every Roman bears—and nobly bears—
Is guilty of a several bastardy
If he do break the smallest particle
Of any promise that hath passed from him.” –l. 329

* Cassius was the founder of the conspirator faction indeed, but they all instantly keep Brutus’ opinions as strict commands. About whether they should or should not invite Cicero to join the faction, for instance:
Cassius: “But what about Cicero? Shall we sound him?”
Casca:   “Let us not leave him out.”
Cinna:   “No, by no means.”
Brutus:  “O, name him not; let us not break with him,
For he will never follow anything
That other men begin.”
Cassius: “Then leave him out.”
Casca:   “Indeed he is not fit.” –l. 338

Oh, so quick did they change their mind… :)

* Cassius was eager to kill Mark Antony too, but Brutus rejected the idea; Cassius just acted practical, and Brutus was being noble. But sometimes….politics need the practical way...
“We all stand up against the spirit of Caesar,
And in the spirit of men there is no blood.”

* Portia and Brutus was a sweet couple, they respected each other. On that era women was not at the same level as men, but Portia didn’t think like that. For her, a wife should share his husband’s business and the husband should trust her husband, or otherwise she was not wife at all, but merely lover.
“Within the bond of marriage, tell me, Brutus,
Is it excepted I should know no secrets
That appertain to you? Am I yourself
But, as it were, in sort or limitation,
To keep with you at meals, comfort your bed,
And talk to you sometimes?
Dwell I but in the suburbs
Of your good pleasure? If it be no more,
Portia is Brutus' harlot, not his wife.” –l. 387

And how about this? 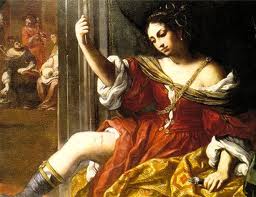 “I have made strong proof of my constancy,
Giving myself a voluntary wound
Here in the thigh. Can I bear that with patience,
And not my husband’s secrets?” –l. 394
Did she really wound her thigh there in the scene? Or she had done it before, and was now showing the wound? (there’s no sign of action here, or have I missed it?)

And Brutus did not scowl her for putting herself at the same level as him, he respected her even more as a ‘noble’ wife. What a husband!

* Ligarius sickness was intriguing, as if symbolizing Romans situation in general under Caesar tyranny. More interesting was this dialog, which implicitly represented their plan to kill Caesar:


Notes:
* Brutus disappointed that Caesar referred him as just “like friends”. Words did matter much, eh?
“And we, like friends, will straightway go together.” –l. 453 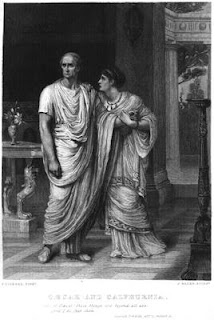 Scene III – A street near the capitol

Artemidorus knew about the conspiracy, and planned to pass on a warning letter to Caesar when Caesar passed by him.

Note:
* And he knew exactly who’s who—Artemidorus, the rhetoric teacher. I wonder how he knew; did an intellectual suppose to get along with senators?

Scene IV – Another part of the same street, before the house of Brutus


Note:
* Poor Portia, I think she—by intuition—somehow knew that Brutus was up to something dangerous towards Caesar. May I call that ‘devoted wife’s intuition’?

Posted by Fanda Classiclit at 1:33 PM