Melanie Hamilton in Gone With The Wind

Although she was not made the main character in Gone With The Wind, I think Melanie was the real heroine. Melanie was a timid, simple, humble woman with a very kind heart. Her main strength was how she could see the positive side of every person; she followed her own instinct, not what people around thought about the person.

Melanie was not typical women who glow in parties; and being the center of attention was never her aim. She even preferred to be behind the curtain all the time. However people always love her, I can’t think of any character in this story who did not love Melanie—not even Scarlett although she tried hard to. People love her because she was always genuine in heart, no pretense, always willingly to pour her love and affection to everyone because she wanted to, not because she needed something from them in return. All they’ve got to do was just opened their heart.

On the earlier stages of her life, I thought Melanie was a passive woman with the lack of initiative, but apparently she developed very much throughout the story. Hard times reshaped her a lot. She might be shy, but she was very brave when needed. Twice in a crisis, she calmly made quick decisions and acted right. 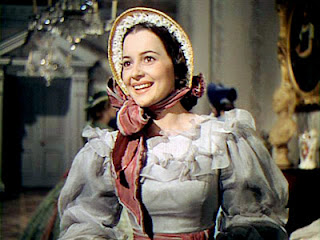 Her only weakness was that she only believed what she wanted to, she could not accept that people she loved made a mistake. She definitely closed her eyes of what happened between her husband and Scarlett. Instead of analyzing every details, she just threw the idea away only because she loved both of them, and they won't therefore do such a thing.

Anyway…Melanie was a real lady with her inner beauty, as Rhett Butler said…. “Beauty doesn’t make a lady, nor clothes a great lady.”

Posted by Fanda Classiclit at 9:00 AM
Email ThisBlogThis!Share to TwitterShare to FacebookShare to Pinterest
Labels: blog hop