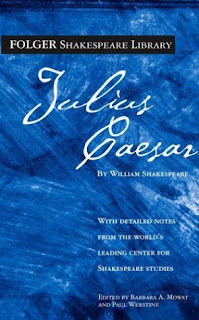 “Beware the ides of March.” If only Julius Caesar had believed in this prophecy, Shakespeare might have never written this tragedy….

Roman history is one of my favorite interests. I have read several historical fictions with Roman history theme, but so far I have never read about Julius Caesar, or his assassination in particular. Reading this favorite subject of mine as a play, only increased my excitement! This is the second Shakespeare’s play I have ever read, and unlike my first encounter (A Midsummer Night’s Dream), I enjoyed Julius Caesar a lot. Maybe it’s because of the theme, but maybe I fit more with tragedy than comedy.

Gaius Julius Caesar was one of the most successful rulers of Rome; and this play depicted the era of his dictatorship in Rome—while Rome was actually still a Republic. This condition created political envies among senators and aristocracy in the Senate, because Senate was practically muted by Caesar. Caius Cassius was one of the unsatisfied senators. He persuaded a noble man among them who were a close friend to Caesar: Brutus, to join his group of Conspirator. Brutus was so naïve that he was persuaded and agreed to murder Caesar.

The murder scene was great—although I believe the reality was even more horrible than the play’s scene. There were originally around 60 senators who took roles in this assassination, and Caesar died after receiving 23 stabs. What made it more tragic, was Caesar’s last words. He always loved and trusted Brutus, and at first he tried to defend himself despite of his wound; however knowing that Brutus was one of his murderers, he finally surrendered and died. The original murder scene was more brutal I think, because even when Caesar had fell and laid down helplessly, they (60 senators!) continued to stab him. He uttered his last word to Brutus: “Et tu, Bruté?” (You too, Brutus?) before he finally died. This was one of my favorite moments in this tragedy. It was so tragic to know that a person so noble, so honorable that you loved and trusted so much, betrayed you and literally stabbed you. I think for Caesar, the hurt from Brutus’ betrayal was even more than the stabs....

And what was it all about, actually? Did Roman lower class really suffer at that time under Julius Caesar (the excuse they had given to legitimate the assassination)? No! The first scene in Act I proved that, the workers took a day off and well-dressed to celebrate Caesar’s triumph. So it’s was all about political envies. Cassius was the promoter, but so the rest of the conspirator—well, all except Brutus. Like what Mark Antony later stated:

“This was the noblest Roman of them all.
All the conspirators save only he
Did that they did in envy of great Caesar.
He only in a general honest thought
And common good to all, made one of them.”

Like I have said in Act 5 post, it’s so ironic that Brutus’ (or the Conspirators’) excuse to kill Caesar was to prevent him from transforming the republic into a monarchy, but after that, Rome fell into civil war and finally became a monarchy anyway.

There were also some other ironic misunderstandings or mishaps within the play. When Caesar was on the way to the Senate House, for example, Artemidorus submitted a warning letter—and an exact one—that if Caesar has read it before he arrived at the Senate, well…the story would be altered :), but Caesar refused to read it just because Artemidorus insisted on it. Another irony ‘letters-related’ was false letters Cassius wrote for Brutus. I believe it was those letters that finally convinced Brutus to take action. It was so a child game that you might wonder how a politician could be that naïve (if not stupid) to believe in.

But the biggest ironical scene was perhaps in the battle field when Cassius thought Titinius was captured and murdered by the enemies, while in fact the shouts of joy he heard was of Brutus’ armies who were welcoming Titinius. Cassius just believed what his servant, Pindarus told him, he took it as a truth, and killed himself without re-checking. A politician like Cassius done that, can you believe that? Or, was it merely a guilty feeling?

Another favorite moment of mine was Mark Antony’s oration at Julius Caesar’s funeral. It’s a very clever and wise move from Antony. He knew that he must looked as if he made an allegiance with the conspirator, and he knew he could trusted Brutus on this—once again Brutus made mistake by trusting Antony, poor Brutus…you should never be a politician! So Antony grabbed Brutus’ confidence to perform a funeral oration, and look how he swayed beautifully from praising Brutus and co as noble men to cursing them as brutal murderer of a great man of Julius Caesar! And look how clever he was to tease the citizens by revealing that he had Caesar’s will earlier in the speech, but kept the content only near the end, which convinced the citizens that Caesar was a generous and honorable King who had been murdered by villain conspirators, and that they must take avenge. Well done, Antony!

Five stars I granted to this play, for I was really enjoying every moment of it, and Shakespeare has helped me to vividly imagining the real scenes. Well, I must confess here, that through the play I couldn’t help to imagine the real setting, instead of the play’s setting. I know I should have been concentrating on the play, but I don’t know how my imagination always hops to Rome’s streets, the forum, and even the battle field… :) And at the end, I was thinking….which was the real tragedy in this play? Caesar’s death? Or Brutus’ ? I pick the first, because Caesar was murdered merely because his enemies’ envies, not purely for the sake of Rome; so it was just a political move, not a heroic action. Tragic, yet ironic….

Posted by Fanda Classiclit at 8:50 AM