Basil Hallward on The Picture of Dorian Gray: Character Thursday (18)

Basil Hallward
The Picture of Dorian Gray by Oscar Wilde 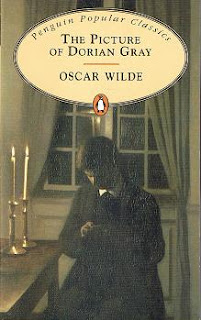 Basil is a young talented and well known artist who was fascinated by a rich beautiful young man called Dorian Gray. After they become friends, Basil painted a picture of Dorian. His passion towards Dorian reflected to the picture—which later become Basil’s masterpiece. After seeing his own picture, Dorian Gray wished to keep his youthfulness immortal, while the picture must bear all his corruption in flesh as well as in sins. The altered Dorian was now enthralled by the poisonous-mind Lord Henry, and neglected Basil. However, Basil kept taking good care of his friend. From the first time Dorian met Lord Henry, it was Basil who warned Lord Henry to not poisoning Dorian’s innocent mind.

I see Basil as a man with a strong morality. Every time Lord Henry or Dorian said of something cynical or immoral, Basil would say something like, ‘you know you don’t mean that!’, as if he trusted that his friends would not think such an awful idea. In many occasion Basil tried to prevent Dorian from moral degradation in the society, however he never forced his will to Dorian. No matter how Dorian has neglected him as a friend, Basil would always be patient to him. When Dorian did not let Basil see his own painting, Basil sadly accepted Dorian’s decision without arguing.

When negative rumors about Dorian began to spread within the society, Basil always stood for Dorian. And after Basil knew that Dorian had changed completely and had done all the evils everyone had rumored about, Basil did not accused him nor said hard things in anger. Basil only asked Dorian to pray together with him, to ask for repentance from God. He did not mention about Dorian’s sins, but only wish him to be relieved from them. How lucky anyone who has a friend like Basil!

If there was any negative point in Basil’s character, it was perhaps his idolatry to Dorian. I mean, it’s normal to love and adore someone, but I think Basil had been over-worshipping Dorian, that had a bad influence to Dorian in the end. But overall, I like Basil Hallward, he is a friend who will always be there for us, no matter how bad we treated him sometime… Don’t you just love to have a friend like that?
Posted by Fanda Classiclit at 7:41 AM
Email ThisBlogThis!Share to TwitterShare to FacebookShare to Pinterest
Labels: blog hop, The Picture of Dorian Gray