A Tragedy..Or, Is It? - Dorian Gray Chapter VIII

"It was an exquisite day. The warm air seemed laden with spices. A bee flew in, and buzzed round the blue-dragon bowl that, filled with sulphur-yellow roses, stood before him." 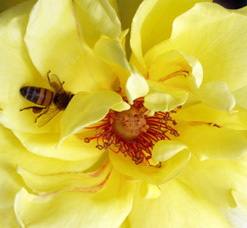 When Dorian woke up, he remembered about his cruelness to Sibyl after looking at the altered painting. He decided to write a letter to ask for her apology, and to propose that they should marry as they have planned. However, soon after the letter finished, Lord Henry came to bring dreadful news: Sibyl had been found dead last night after she committed suicide.

It should be a blow for Dorian, for he had caused a girl to end her own life; and that's what he felt at first, before--as usual--Lord Henry injected his ideas about forgetting his past with a woman and that Dorian should continue his life.

Once again Dorian struggled with his mind about how the painting could have altered, but in the end buried all his fears deep in his heart, and tried to follow Lord Henry's advice, to re-live his life, and went to the Opera with Lord Henry.

Painting = reflection of soul
I think the painting to Dorian Gray equal to our soul to us. Dorian Gray might pretended that Sibyl's death meant nothing to him, however every time he looked at the painting, he would be reminded to his sin. The painting became barometer of his life; the consequences of what he did would be reflected by the painting. No matter how hard he pretended, or how well he'd hidden his sin, the painting would always be there to disturb his consciousness. Man can never runaway from his conscience...

I don't know what I should feel about...

What Lord Henry said about Sibyl, what she was for Dorian:

That quote sounds beautiful, and perhaps that's what happened, but to me it's thrilling. It's as if we can ignore other people's life because they are 'only dream' to us; a mere fiction character of a play. Listen people!.. Sibyl was as real as we are. Being young and naïve doesn't mean to be 'empty'.

Lord Henry had taken two souls
He had taken and altered Dorian's soul, and because of that, Dorian had caused Sibyl's death.

Posted by Fanda Classiclit at 11:32 AM