The Victorian London from Sketches by Boz: The Streets & Shops

This is my third post about Victorian London, inspired by Dickens’ Sketches by Boz, for the Victorian Celebration. If this is your first visit, you can find our two previous excursions to Victorian London, where you can find The Amusements of 19th century Londoners in one of them, and come to learn The Occupations of Londoners at that era, in the other. Today I will take you to see few famous Streets of 19th century London, as well as Shops where mid-class Londoners used to spend their money at. Here they are… [click the picture to enlarge]

The slum district of Seven Dials

Seven Dials is a small but well-known road junction in the West End of London in Covent Garden where seven streets converge. At the centre of the roughly-circular space is a pillar bearing six (not seven) sundials, a result of the pillar being commissioned before a late stage alteration of the plans from an original six roads. [wiki]. However, in the early of 19th century, Seven Dials became a slum district of London, which Dickens described as:

“The stranger who finds himself in the Dials for the first time...at the entrance of seven obscure passages, uncertain which to take, will see enough around him to keep his curiosity and attention awake for no inconsiderable time...” ~p. 69.

In 19th century, Monmouth Street is famously known as the emporium of second hand wearing apparel. In this chapter, Dickens specifically brought our imagination to what had happened in a second hand shoes store. But for now, let us entertain ourselves with this picture of a second hand clothes store:

Pawnbrokers, referred to as ‘uncle’, were the poor person’s bank. Clothing and jewellery were handed over in exchange for a loan. If the loan was not repaid within a year, ‘uncle’ could sell the goods. By 1900 there were 700 pawnbrokers in London. Forfeited articles for sale in this window include Sunday best clothing, wedding gifts and ornaments. [source]

If you look at the image, the counter at the customer side are divided into several small sub-counter, separated each other with partition. It is built like that to give privacy for people who don’t want others to know that they had a transaction in pawnbroker shop (who knows the guys next to them are their acquaintances?). Pawnbroker shops usually have two entrances. The front one was for shoppers who wanted to buy the sold goods in fair price, the back entrance was for customers who wanted to exchange their belongings for some loan.


Maybe George Cruikshank illustration for Sketches by Boz can reflect the more real atmosphere inside a pawnbroker shop... 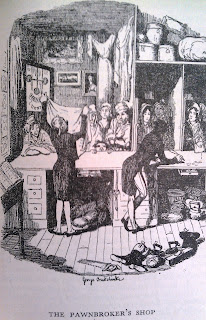 In the 19th century, there were three oyster capitals in the world: London is one of them, with Paris and New York as the others.

I found this in a blog post about oyster shop in 19th century in London: “Astonishing though it is now, at the beginning of the 19th century oysters were cheap and very much a working class food. I suppose the change must have been well underway when Sheeky's oyster bar opened at the end of the 19th century. Joseph Sheekey was the market stall-holder who in 1893 was graciously allowed by Lord Salisbury to sell fish and shellfish on his new manor of St Martin's Court, provided he served meals to Salisbury's theatre-going pals. These days its reputation seems a little variable.” [source]

The front of an oyster shop looked perhaps like this:

And this was a stall selling oysters. 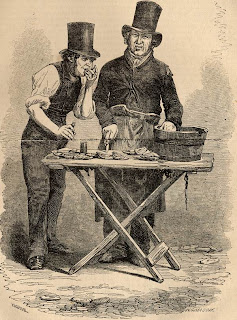 A gin palace is an English name originally for a lavish bar selling gin, later transferred by association to late Victorian pubs designed in a similar style. In the 18th century, gin shops or 'dram shops' were just small shops (often originally chemist's shops as gin originally had medicinal associations) that sold gin mostly to take away, or to drink standing up. In the late 1820s the first 'Gin Palaces' were built, Thompson and Fearon's in Holborn and Weller's in Old Street, London. They were based on the new fashionable shops being built at the time, fitted out at great expense and lit by gas lights. They were thought to be vulgar at the time, although hugely popular. [wiki] 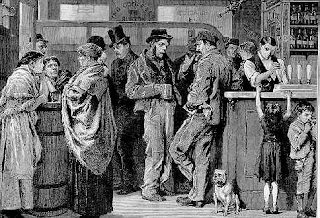 From Sketches by Boz:  “The gin-shops in and near Drury-Lane, Holborn, St. Giles's, Covent-garden, and Clare-market, are the handsomest in London. There is more of filth and squalid misery near those great thorough-fares than in any part of this mighty city.” For his sketch, Dickens picked a large bar in Drury Lane as a setting of a gin shop.

“... All is light and brilliancy. The hum of many voices issues from that splendid gin-shop which forms the commencement of the two streets opposite; and the gay building with the fantastically ornamented parapet, the illuminated clock, the plate-glass windows surrounded by stucco rosettes, and its profusion of gas-lights in richly-gilt burners, is perfectly dazzling when contrasted with the darkness and dirt we have just left.”

Drury Lane is a street on the eastern boundary of the Covent Garden area of London, running between Aldwych and High Holborn. The northern part is in the borough of Camden and the southern part in the City of Westminster. In the 17th century it was the London house of the Earl of Craven, then a public house under the sign of his reputed mistress, the Queen of Bohemia, but by the 18th century Drury Lane had become one of the worst slums in London, dominated by prostitution and gin palaces. [wiki] 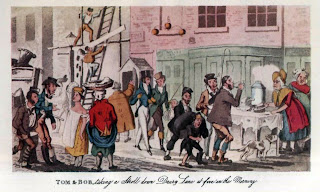 I especially picked Drury Lane among other streets, because this street appeared quite often in Dickens’ sketches. The scenes of both gin shop and pawnbroker shop were located in Drury Lane, and the story in which Dickens described about oyster shop had also mentioned Drury Lane (but it’s not the oyster shop’s location).

Note: In the process of searching an image of Drury Lane, I came across this site which is exhibiting the paintings of Louise Rayner. The theme is about 19th century London, and they are all very beautiful!!! Louise can picture the scene as if we are there ourselves. So, before we end our today’s outing, let me take you to London on 19th century through these lovely pictures….

Don’t forget, next week is our last outing to Victorian London. I will prepare some means of transportations so that you don’t have to tiring yourself during our excursion J. See you next week!


Posted by Fanda Classiclit at 1:30 PM